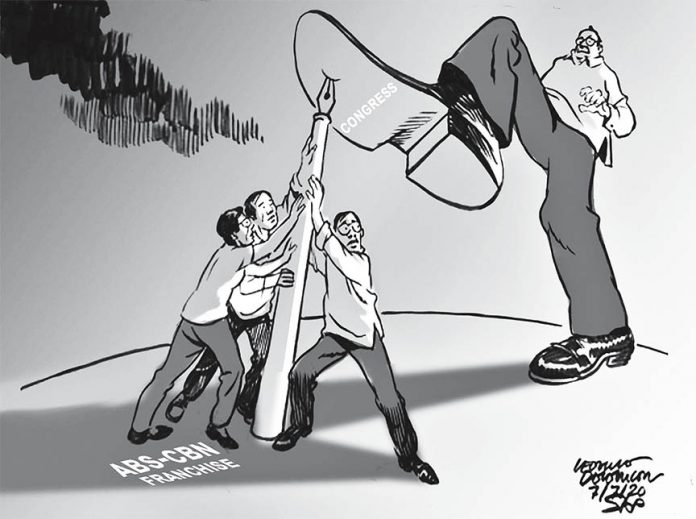 ‘The lady representative pointed out that because of ABS-CBN’s irresponsible coverage of the Dengvaxia controversy, many parents became afraid and angry, polio has returned followed by an outbreak of measles, then Japanese encephalitis and dengue. People have become wary of vaccines in general.’

FOR the radio-television firm ABS-CBN, the vagaries of politics and business have taught this behemoth and its superstar media personalities that humility is still a virtue and adherence to professional rectitude will see you through every gale and headwind in the media industry.

The super media firm has been on a defensive mode during the series of hearings of the House of Representatives’ committee on legislative franchises and committee on good government and public accountability.

One of the most telling criticisms against ABS-CBN concerns its handling of the Dengvaxia scandal, and as expected, the broadside came from Rep. Janette Garin of the first district of Iloilo. Garin called out the network’s news and current affairs department for its penchant for interviewing “fake experts” to talk about highly sensitive health and safety topics.

Garin, a former health secretary, said the TV network was unable to perceive who the real experts on public health are. She pointed out that in many instances, ABS-CBN “sacrificed public health simply because of the fight to be the first one to come out with the news.”

The lady representative pointed out that because of ABS-CBN’s irresponsible coverage of the Dengvaxia controversy, many parents became afraid and angry, polio has returned followed by an outbreak of measles, then Japanese encephalitis and dengue. People have become wary of vaccines in general.

Garin named, in particular, Dr. Erwin Erfe, a favorite resource person of Ted Failon and Noli de Castro, who is from the Public Attorney’s Office forensics division and was touted by the TV network as a “forensics expert.”

In response, ABS-CBN News chief Ging Reyes acknowledged at the hearing that the network made use of interviews from all sources, including non-experts. She said, “I myself received feedback that some of our commentator interviews with non-experts tended to alarm people. I acted on it immediately and we dealt with commentary as well. We also put an end to stories on Dengvaxia that tended to cause alarm among the general public.”

ABS-CBN’s 25-year franchise expired last May 4 and the corporation is applying for another one at the House of Representatives.

This developed as Cavite 7th district Rep. Jesus Crispin “Boying” Remulla noted that several resource persons in the hearings have lied to the committee, and asked that they be cited in contempt and punished.

The House panels are in a cusp of a decision whether to endorse or not to the plenary the franchise application of ABS CBN tomorrow, Thursday. This is an interesting day to watch in the House of Representatives, since it involves a very incendiary issue.

Lexus electrified: luxury cars of tomorrow that you can drive today