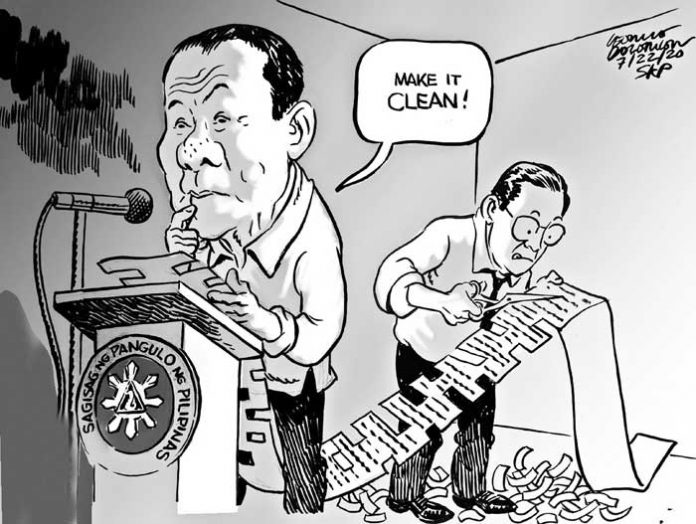 ‘Pangilinan is not the first person to hint that some people are making a lot of money — unconscionably — in this fight against the pandemic.’

HEALTH authorities are using two kinds of tests among Filipinos desiring to know their health score vis-a-vis SARS-CoV-2 that causes the disease COVID-19. These are called reverse transcription-polymerase chain reaction (RT-PCR) which Health Secretary Francisco Duque III called the gold standard in testing for the virus, and the so-called rapid test.

The RT-PCR involves swabbing the nose and the mouth to get specimens, to be analyzed in the laboratory to know if the coronavirus is present or not in the person being tested. It usually costs from P3,000 to P8,000 depending on whether the facility conducting the test is private or public. The rapid test, on the other hand, involves getting blood samples for laboratory analysis, to look for the presence of antibodies that the body naturally produces to fight any virus. This test costs P400 to P800, but it does not mean it is cheaper than the first, because a person who comes out clean from this test will still have to undergo a confirmatory RT-PCR test which is the one government authorities, employers, and even the airlines consider as valid.

Several national organizations of physicians have frowned on the use of rapid tests because of the inadequacy of testing only for antibodies, and also because of the high probability of inaccurate results. You see, some people had earlier been attacked by the virus but there is no trace or evidence that it happened, as former Health Secretary Manuel Dayrit pointed out.

Dayrit and the other doctors say that rapid tests, if used to check whether a person is currently afflicted with COVID-19, could produce false positive and false negative results. Luckily, the Department of Health knows this and has advised local government units not to use rapid tests so much because it is not conclusive in determining if a person is okay or not. Besides, aside from shelling out P400 to P800 pesos for the rapid test, an individual still needs the more expensive RT-PCR for confirmation, making the rapid test more expensive.

While we are on the topic of the costs of these tests, Sen. Francis Pangilinan revealed that prices of imported test kits significantly dropped immediately after the DOH announced the approval of the commercial release of the Filipino-developed test kits.

Pangilinan said long-time DOH insiders have said that some distributors of imported COVID-19 test kits have lowered their prices by 26 percent after the announced commercial release of the much cheaper test kits developed by the University of the Philippines-National Institutes of Health (UP-NIH). It is called the GenAmplify Version 2 test kit.

Always ready to pounce on the opportunity to criticize the administration, Pangilinan hinted that somebody is making a lot of money from these imported test kits. He asked: Who profited and took advantage of the situation during this pandemic?

Pangilinan is not the first person to hint that some people are making a lot of money — unconscionably — in this fight against the pandemic. Businessman Ramon S. Ang, a huge contributor in this public-private response to save lives, did not mince words in pointing this out during the opening of a quarantine facility San Miguel Corp. donated in Mandaluyong City recently.