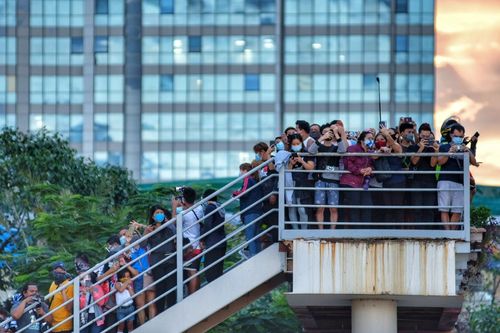 A STATION commander of the Metro Manila Police District that has jurisdiction over the “white sand” area on Manila Bay has been relieved for failing to ensure health protocols were observed by people who trooped to the area over the weekend to see the makeover.

Citing a report from the PNP, Interior Secretary Eduardo Año said the station commander, Lt. Col. Ariel Caramoan of MPD’s Station 5 (Ermita), should have ensured that measures were put in place to prevent the “very dangerous” incident.

“He will be relieved of his position today for failing to enforce the minimum health standard, particularly the one meter distancing,” said Año, a member of the Inter-Agency Task Force for the Management of Emerging Infectious Diseases.

The Department of Environment and Natural Resources allowed the public to see the “white sand” project on Saturday and Sunday, leading to social distancing violations. Thousands who went to the area clearly violated health protocols, as photos taken by media photographers showed.

Año said that while the DENR allowed the public to see the project, it is the responsibility of the MPD and the local government of Manila to “establish measures to ensure no health protocols are violated.”

“More PNP personnel were deployed there to restore order and enforce the one meter distancing. MPD is coordinating with Mayor Isko Moreno to determine the appropriate actions to ensure the observance of minimum health standards to include possibility of closing the area until protocols are properly emplaced,” Año said.

He also urged the MPD to inform the people going to the area to observe physical distancing and other health protocols. “After the warning, the LGU of Manila and the PNP can accost people who are violating (the protocols),” Año said.

He also appealed to the public to strictly follow health protocols when going to the area.

“If possible, we advise the public to stay at home. You will have your time to see Manila Bay. It’s shown on television, you don’t have to go there personally,” Año said, noting that Metro Manila is still under general community quarantine due to the continuing threat of COVID-19.

“We are not promoting anything that will lead to spike(s) or surge(s). We should be responsible in our actions),” he said.

The Metropolitan Manila Development Authority, meanwhile, called on the public who will visit the Manila Bay to see the dolomites white sand to be responsible in disposing their trash.

MMDA Assistant Secretary Celine Pialago said the agency will deploy personnel and environmental marshals to secure the place will remain clean from any trash or garbage.

She said ticket violations will be issued to those who will be caught littering in the area.

On Saturday, the MMDA conducted a coastal clean-up drive along Manila Bay, particularly at the Manila Yacht Club area where they collected two trucks of garbage such as stryo, plastic bottles and bags, and other kinds of trash that cannot be easily decomposed. – With Noel Talacay