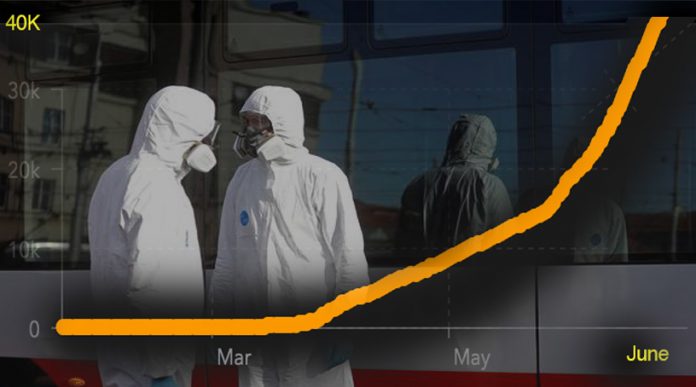 THE country may see some 40,000 cases of the novel coronavirus disease (COVID-19) by June 30 if the current reproduction rate of the disease continues, according to a research team of the University of the Philippines.

Dr. Guido David of the UP Octa Research said the projection is based on the current reproduction rate, or “R-naught,” of COVID-19 which is 1.2.

“R-naught” represents the number of new infections estimated to stem from a single case. For example, if a disease has an R0 of 10, a person who has the disease will transmit it to an average of 10 other people. Currently, we are consistently at 1.2. But we should not be complacent because of this,” David said in an online press briefing of the Department of Health yesterday.

“So far, our numbers have not escalated beyond what we consider as manageable. Right now, the numbers are a cause for concern, but not a cause for panic,” he added.

Sought for reaction to the projection, Health Undersecretary Maria Rosario Vergeire said, “We interpret with caution when we use these numbers because, as I’ve said, these models and projections use different assumptions also.”

The country’s COVID-19 cases rose to 24,175 yesterday with the addition of 443 infections.

There were nine more deaths, or a total of 1,036. As to patients who have recovered, a record 270 cases were reported yesterday by the DOH, or a total of 5,165 recoveries since the first case in the country was confirmed in February.

Globally, the disease which emerged in China late last year has infected at least 7.1 million persons in more than 200 countries and territories, and killed at least 408,000 individuals as of June 10, according to the World Health Organization.

Professor Ranjit Singh Rye said UP Octa Research would not recommend to government “any loosening of restrictions, unless there is enough data to support changing the status now.”

“It’s really predictable that once you open up, there’ll be spikes in the number of cases,” he added.

President Duterte is expected to announce a decision on Monday on new quarantine levels in Metro Manila, which is under general community quarantine (GCQ), and other areas.

Metro Manila was under enhanced community quarantine for about two-and-a-half months before it transitioned to GCQ on June 1.

Rye said authorities should target to bring down the R-naught to lower than 1 “which is the level we had during the enhanced community quarantine.”

“When the number is above 1, there’s a significant community transmission and, if left alone, it could lead to an outbreak,” Rye said.

Vergeire, asked about the research team’s position against the easing of community quarantines, said, “It is not just health that is being considered by the IATF-EID (Inter-Agency Task Force for the Management of Emerging Infectious Diseases). It also looks into other sectors. Health is just one of them.”

On the new record high of recoveries, Vergeire attributed this an improving capacity of the health system.

“This is likely brought about by our deeper knowledge on how to handle COVID-19 patients, as well as improved healthcare system capacity,” said Vergeire.

She also pointed to the help provided by the increasing testing capacity of the country.

“We can now identify the patient earlier, therefore enabling us to begin treatment at an earlier stage,” said Vergeire.

With the study on convalescent plasma therapy still ongoing, the Philippine Blood Center (PBC) is calling on all COVID-19 survivors to consider donating their plasma as possible treatment to the disease.

“While there is still no conclusive evidence that these antibodies may assist in the recovery of another infected individual, the initial results are very encouraging already,” said PBC officer-in-charge Dr. Pedrito Tagayuma, at a press briefing late Wednesday.

Convalescent plasma refers to the plasma that is collected from the blood of a patient who has recovered from an illness.

In the case of COVID-19, Tagayuma said this means collecting plasma that contains either immunoglobin G (IgG) or immunoglobin M (IgM) antibodies or both.

Those who are allowed to donate plasma include individuals who initially tested positive by Reverse-Transcription Polymerase-Chain-Reaction (RT-PCR) testing, but tested negative upon recovering, and without symptoms for at least 14 days.

Tagayuma said people who tested positive using RT-PCR testing may also donate even without a negative RT-PCR test, provided they have not shown symptoms for at least 28 days.

For those who have not been screened using RT-PCR testing but have tested positive for IgG antibodies, Tagayuma said they may also donate once they have been symptom free for at least 28 days.

The renewed call for COVID-19 survivors comes as part of the commemoration of the World Blood Donor Day on Sunday, June 14.

Forty more overseas Filipinos were infected with COVID-19 while eight others have died, according to the Department of Foreign Affairs.

The DFA also reported 20 recoveries in Asia and the Pacific, Americas and Europe while the new deaths were recorded in the Americas and the Middle East.

Overall, the number of Filipinos in 51 countries infected with COVID-19 stood at 5,469 yesterday with 2,366 recoveries and 390 deaths.

The Americas still has the highest number of fatalities at 155 followed by the Middle East and Africa with 142, Europe with 91, and the Asia and the Pacific with two.

In terms of cases, the Middle East/Africa has the highest number with 3,385 cases followed by Europe with 864, and 669 for the Americas.

The Asia and the Pacific regions registered 551 cases.

In Saudi Arabia, six of 37 personnel of the Philippine Overseas Labor Office (POLO) in Riyadh tested positive for COVID-19, prompting the temporary suspension of its operations starting June 14.

“Two POLO staff were earlier found to be infected, and eventually transmitted the virus to the others in the post,” said Labor Attaché to Riyadh Nasser Mustafa.

Mustafa said all POLO officers and staff members will be on a work-from-home arrangement.

“The objective of the temporary suspension is to prevent the escalation of infection among POLO staff and its clients and to allow the conduct of a thorough disinfection of the office premises,” he said. — With Ashzel Hachero