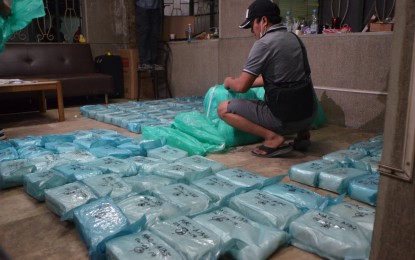 TWO out of 100 Filipinos aged 10 to 69 or around 1.67 million are currently using illegal drugs in the country, a Dangerous Drugs Board survey completed last February showed.

“The result of the survey is very revealing,” DDB chairman Catalino Cuy said yesterday in Cavite where illegal drugs valued at P6.25 billion were destroyed by the Philippine Drug Enforcement Agency at the Integrated Waste Management facility in Trece Martires.

Cuy added that “there are about 4.67 million lifetime users or those who used drugs at least one in their lifetime.”

The survey was conducted in collaboration with the Department of Social Welfare and Development, Philippine Statistics Authority and -Metrics Asia Pacific Corporation.

The DDB said the respondents, aged 10 to 69, were randomly selected from 9,341 households in the country’s 17 regions. It said the estimated current user prevalence rate at 2.05 percent is lower than the 2018 global estimates of 5.3 percent published by the World Drug Report 2020.

In 2016, the DDB reported there were 1.8 million estimated Filipinos who were using drugs based on a 2015 survey.

“The previous findings, however, did not use proxy indicators used in the data gathering and analysis of the 2019 Drug Survey. Thus, DDB along with key anti-drug law enforcement agencies, deemed (the) four million figure as the best estimate of the number of drug users in 2016,” it said.

It said the decline in the number of drug users “can be attributed to the success of the government’s anti-drug campaign and steadfast priority given by the government to create drug-free communities under the current administration.”

In terms of awareness of dangerous drugs and substance, the study said shabu was seen as the most well-known at 47.9 percent, followed by marijuana at 35 percent.

The drugs burned by the PDEA included 879 kilos of shabu, worth P5.9 billion. The rest were cocaine and marijuana.

PDEA chief Wilkins Villanueva said from 2008 to 2020, the agency has destroyed 25 tons of solid and 8,705 liters of liquid illegal drugs, worth P76 billion.

“More than 70 percent of these drugs were destroyed during the time of our President,” Villanueva said, referring to President Duterte, who ordered last week the destruction of illegal drugs stored in government facilities to prevent them from being recycled and resold to the public.

Villanueva said he called Duterte on Wednesday night to inform him about the scheduled burning of the drugs. He said the President told him he cannot attend the ceremony because he has a previous engagement.

“He begged off because he has another schedule today. But maybe on November 26, he may be the guest. The President wants to witness the destruction of the rest of the 1.5 tons of dangerous drugs,” said Villanueva.

“The 1,529 kilograms left will be burned on November 26, next month,” said Villanueva.