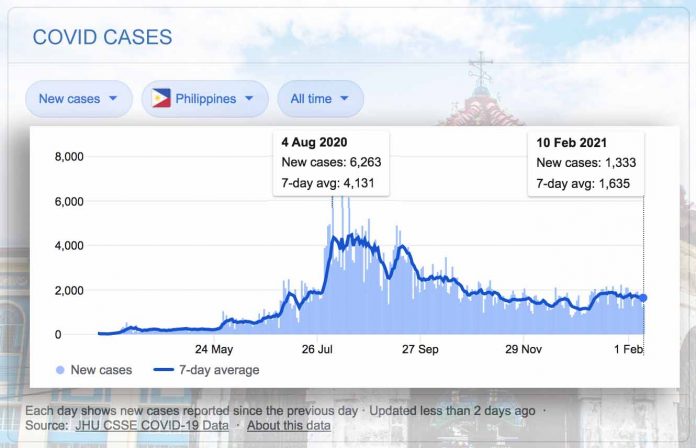 THE independent OCTA Research Team yesterday raised the alarm over the surge of coronavirus disease (COVID-19) cases in Cebu City, saying the reproduction number has hit about 1.6, higher than the reproduction rate in the National Capital Region which is 1.0.

In a virtual press briefing hosted by the Department of Health (DOH), OCTA team member Guido David said the trend in Cebu City is worrisome, especially the February figures.

“For the whole of January, there was an average of 51 cases per day. And now for February, it’s 129 cases per day,” David said, adding that last December, the city averaged just seven cases.

“Yesterday (Wednesday), they logged more than 200 cases. So the trend is upward,” he added.

On Wednesday, the DOH said it is closely monitoring the situation in Cebu, including Cebu City.

The DOH said figures in the rest of the country have continuously improving when compared to last year.

According to DOH-Epidemiology Bureau Director Dr. Alethea de Guzman, the country’s epidemic curve has not surged since August, when about 5,000 new cases per day were being reported.

“When we look at the data, though there is some uptick as the cases increased in January, it is not as high or as large a number as when we first started,” said De Guzman. “So, we are doing much better.”

She stressed that it is important for the public not to become complacent.

“Just because the picture is improving or the curve is plateauing, it should not mean that we can already let our guard down,” she said.

The DOH said 68 more patients have succumbed to the deadly virus, raising the number of fatalities to 11,469 while there were 1,734 new cases, meaning the number of infections in the country has risen to 543,282.

There were 423 recoveries, meaning the number of survivors has risen to 500,335, although there are still 31,478 active, of which 87.6 percent are mild cases, 6.9 percent asymptomatic cases, 2.5 percent critical cases, 2.4 percent severe cases, and 0.62 percent moderate cases.