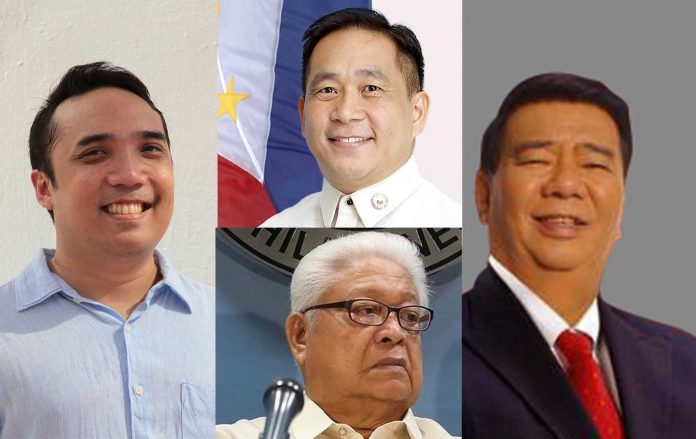 BY WENDELL VIGILIA and RAYMOND AFRICA

PRESIDENT Duterte’s fifth State of the Nation Address (SONA) last Monday seems to have been written before the COVID-19 pandemic hit the country at the start of the year, and the writers did not even bother to update it, the camp of Vice President Leni Robredo said yesterday.

Robredo’s spokesman, former Akbayan party-list Rep. Barry Gutierrez, also said the President did not say anything new, even if everyone had waited for him to reveal his plans in addressing the pandemic, especially now that the number of cases has reached some 83,600.

Robredo, who was not invited to physically attend the SONA at the Batasang Pambansa, monitored Monday’s speech via an online platform.

Magdalo party-list Rep. Manuel Cabochan and Senate minority leader Franklin Drilon said the SONA did not say what the government’s plan is on how to respond to the COVD-19 pandemic.

Cabochan said the COVID-19 pandemic “was not given the commensurate attention it needs considering that it is the most urgent problem right now.”

While there were few economic recovery measures that were brought up, he said there was no clear COVID-19 response plan that addresses urgent issues such as rising cases, inadequate mass testing and strained hospitals and health workers.

“Amid the biggest health crisis we are facing, ironically, little has been said on the medical response. There is no detailed recovery plan and timeline. The approach of the government is still dependent on the vaccine and not how to co-exist in a COVID-19-inflicted environment,” Cabochan said.

The opposition lawmaker said the SONA also “failed to realize the struggles that ordinary Filipinos are experiencing now.”

“The President noted the provision of assistance to the poor but in reality, many have not received this. Many Filipinos are hungry, begging for daily sustenance, stranded in risky environments, and have no livelihood due to the government’s incompetence. This is the state of our nation which the address of the President today did not capture,” he said.

Cabochan said Duterte’s promise of a safe and secure nation was not fulfilled because he, himself, has admitted that the proliferation of illegal drugs continues even after four years despite the numerous killings and “an atmosphere of constant fear from arbitrary law enforcement and abuses.”

He scored the President for being “silent” on recent issues of corruption in various government agencies, obviously referring to the Philippine Health Insurance Corporation (PhilHealth).

“For someone who has strongly detested corrupt activities, the President has taken the opportunity to talk about so-called oligarchies instead of addressing the corruption allegations in his administration,” Cabochan said.

Lastly, Cabochan said the SONA was used again “to perpetuate the false dilemma of waging war when we assert our rights in the West Philippine Sea.”

“This just makes it definite that we cannot expect the protection of our sovereignty throughout the Duterte administration. One thing is sure, our nation will suffer great losses in the hands of Mr. Duterte. But let us also look at the good side. We may borrow his words, ‘the patience of the Filipino people is reaching its limits…’ for ‘half-baked, half-cooked, lousy service,’” he said.

Albay Rep. Edcel Lagman, an opposition leader at the House, said it was “completely frustrating that any master plan was only mentioned peripherally.”

“The anticipated road map meandered into the roadside of trite generalities and an invocation that the people should ‘trust its government’ without telling them what actually the government’s plans are,” he said.

While the President proposed a number of laws, some of these have been mentioned in his previous SONAs, all these proposed legislation can be threshed out in the Legislative Executive Development Advisory Council (LEDAC) which the President has not convened for a long time, Lagman said.

Lagman pointed out that the only statement of the President pertinent to a “road map” in response to the pandemic is his endorsement for Congress to approve the “Bayanihan Act Part II” which appropriates a minimal amount of only P140 to P162 billion as COVID response fund.

This minuscule amount cannot properly respond to health and economic emergencies, and it is stingy compared to our ASEAN neighbors whose COVID-19 expenditures are much bigger in gross and per capita outlay.

Drilon, in an interview with CNN Philippines, Drilon said he would have wanted hear from the President a comprehensive plan on how to strengthen the country’s health system amid the COVID-19 outbreak.

Drilon said the President made no mention of definite plans to cushion the impact of lockdowns in the country.

“But four months into this, I had wished that we should be able to come up with a more definite plan on the matter of lockdowns in order to minimize its adverse effects on our economy. That was what we are looking for,” he added.

Sen. Richard Gordon said the President should have discussed his plans on how stop the pandemic and not merely rely on solving the crisis when a vaccine or cure has been developed.

Presidential spokesman Harry Roque said those who were unsatisfied with the SONA are probably deaf if they did hear the government’s plans to recover from the pandemic and restart the economy.

He said it is not surprising for the critics and the opposition to be dissatisfied as they never see anything good about the administration.

He added that everyone is entitled to their opinion but for him, he would even rate the SONA 9 out of 10 because he thought the speech was too long (1 hour and 40 minutes) and did not include “quotable quotes” that people would remember it by.

Roque was referring to the legislative measures endorsed by the President in his SONA to support the government’s efforts to push for the recovery of the country.

He added that prior to the actual SONA, pre-SONA forums discussed accomplishments of the administration, actions undertaken by government to address COVID-19 and other plans, programs and projects that it will continue to undertake.

The Catholic Bishops Conference of the Philippines (CBCP) – National Secretariat for Social Action (NASSA) expressed disappointment over the SONA.

CBCP-NASSA chairman Bishop Colin Bagaforo said, “The SONA was just a reiteration of the same rhetoric on drugs, which widely resulted in extrajudicial killings, and corruption, which shielded his cronies.”

“He was so enraged with past disappointments all he can think of is revenge, which at the end of his speech, just divided further an already broken nation,” he added.

“The 5th State of the Nation Address of President Duterte just exposed how troubled the executive leadership is in terms of managing the state affairs,” he added. – With Jocelyn Montemayor and Gerard Naval