PRESIDENT Duterte has designated Lt. Gen. Cirilito Sobejana as the new Army chief, becoming the second awardee of the highly-regarded Medal of Valor to command the 100,000-strong unit. 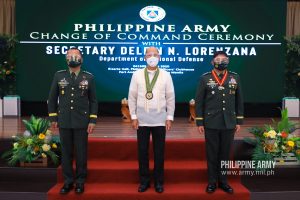 Sobejana said he was informed by Lorenzana of his appointment Thursday morning. “I am very happy to be selected to lead the Philippine Army. I consider this as a new challenge,” he said.

Sobejana is a member of the Philippine Military Academy Class of 1987 and an underclassman of Gapay and Santos who both belong to the PMA class of 1986. Also from Class 1986 is former PNP chief and now Sen. Ronald dela Rosa.

Sobejana is reaching the retirement age of 56 on July 31 next year and may again be a candidate for AFP chief when Gapay retires on February 4 next year.

Sobejana was awarded the Medal of Valor, the highest military decoration in combat, “for acts of conspicuous courage, gallantry and intrepidity above and beyond the call of duty” during a firefight with about 150 Abu Sayyaf men in Isabela City in Basilan in 1995.

Sobejana, then a captain, led an elite Scout Ranger company in the fierce gun battle that led to the death of 30 Abu Sayyaf terrorists. Sobejana sustained bullet wounds that almost severed his right arm. He stood his ground and remained in control during the encounter. He exposed himself to enemy fire to direct the operation.

He is the second Valor awardee to head the Army, with the first being now retired Lt. Gen. Arturo Ortiz (PMA Class 1979) who earned the medal following a fight against communist rebels in Negros Occidental in 1990.

Sobejana assumed the top Wesmincom post in June last year and supervised operations against terrorist groups such as the Abu Sayyaf and Bangsamoro Islamic Freedom Fighters in Mindanao. He also served as commander of the Army’s 6th Infantry Division in Maguindanao, of the Joint Task Force Sulu, and of the Army’s 601st Brigade based in Sultan Kudarat.

Sobejana also became the first Filipino to be named chief of staff of the UN Disengagement Observer Force in Syria in 2014.

As to his program as Army chief, Sobejana said: “It is inherent for a major service commander to build the capability of the organization in terms of equipment and the human resource.”

“Of course, have to come up with the doctrine, techniques, tactics and procedures that will ensure victory of our troops as they are deployed to the frontline,” he also said.

Sobejana said the public’s expectation of him as Army chief may be high, he being an MOV awardee “but I am also expecting a lot from them,” noting that “public support is very essential.”

There was still no word as to who will succeed Sobejana as Wesmincom chief.