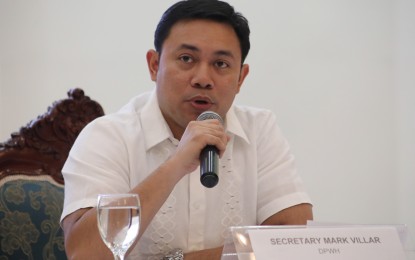 CEBU Rep. Rodrigo Abellanosa has warned Public Works Secretary Mark Villar that he, too, could be removed from his post like his party mate, former speaker Alan Peter Cayetano, because of the alleged inequitable distribution of infrastructure projects among congressional districts under the proposed P4.5- trillion national budget for 2021.

Abellanosa reminded Villar that it was the unfair allocation of public works projects that led to the ouster of Cayetano, who, like Villar, is a member of the Nacionalista Party (NP).

“If the unfair allocation of the DPWH (Department of Public Works and Highways) budget has caused the downfall of the former speaker Alan Peter Cayetano, for all we know, it might become also the cause of (the) political downfall, (although) I hope it won’t, of our dear, very good friend Secretary Mark Villar,” Abellanosa said during Wednesday night’s plenary deliberations on the DPWH’s proposed P667.32 billion budget for 2021.

He decried that the two districts of Cebu City were given an infrastructure budget of only P500 million, while the district of Camarines Sur Rep. Luis Raymund Villafuerte, who is also an NP stalwart, was allocated P11.8 billion.

Abellanosa also questioned the P8 billion infrastructure budget of Taguig-Pateros, which is represented by the former speaker and his wife Rep. Lani Cayetano.

These allocations were first revealed and questioned by Negros Oriental Rep. Arnolfo Teves, a Velasco ally, during the budget hearing on the DPWH’s budget in the committee level.

Abellanosa said Cebu City’s P500 million infrastructure fund is just the budget of Camarines Sur for the construction of its provincial Capitol while another P250 million is allocated for its sports complex.

Villafuerte, who represents the second district of Camarines Sur, earlier said only P3.3 billion is allocated for his district out of CamSur’s 11.8 billion public works budget for 2021.

He said his district’s budget only seems bloated because of two flagship projects approved by the National Economic and Development Authority (NEDA): the CamSur Expressway and the Pasacao-Balatan Tourism Highway.

Villafuerte said the same thing happened to Taguig City because of the C-6 road which is a national road.

Abellanosa’s made the warning as President Duterte on Wednesday night said the DPWH remains to be riddled with corruption, with most of its projects embedded with red tape.

“The first whiff, makaamoy ka lang na hinihingian ka… Dito sa DPWH malakas iyan diyan (The first whiff, you can smell that they’ll ask something of you… Here at DPWH, that is strong),” the President said during his weekly “Talk to the People” address.

Duterte did not name names but said that “no (DPWH) construction can convene when there is no transaction.”

The President reminded the public to report instances or file complaints of corruption against any official though hotline 8888.

Roque said it is possible that the President might call for an investigation of the DPWH budget issue but for now, Roque said Duterte continues to trust and have confidence in Villar.

Sen. Panfilo Lacson threatened to introduce cuts and realignments in the DPWH’s P667.3 billion budget if no substantial adjustments are made in the final version of the 2021 GAB to be transmitted by the House of Representatives to the Senate.

“That being said, if no substantial adjustments are made once the final version of the 2021 GAB is transmitted to the Senate, hopefully next week as promised by the new Speaker, I intend to propose during our plenary debates to cut or realign the excessive and unjustified ‘NEP amendments’ that the DPWH illegally made,” Lacson said in a statement.

Lacson said it has been an open secret that a number of corrupt DPWH officials and solons have always asked for commissions or kickbacks from contractors, which is allegedly the reason why the proposed budget for the department has been “mangled beyond recognition” as it has been riddled with lump sum appropriations.

“Fact is, contractors openly talk behind the backs of these officials, changing the definition of ‘mabait (kind)’ and ‘maginoo (gentleman)’ in the process: officials from the executive and legislative branches who ask for ‘only’ 10 percent are ‘mabait, maginoong kausap’ and those who demand 20 to 30 percent are ‘matakaw (greedy)’, while those who demand advance payments and renege on their word as ‘balasubas (swindler)’ and ‘mandurugas (thief)’,” Lacson said.

Lacson said President Duterte’s calling out corruption in the DPWH was very timely.

During last Wednesday’s DPWH budget hearing, Lacson questioned the department for altering its submitted budget proposal compared with the one submitted by the Department of Budget and Management to Congress.

Villar reasoned out that the DBM informed them late of the deadline in coming up with the agency’s proposed budget. He said this has been corrected as they have already submitted detailed annexes of their budget proposal.

Lacson also hit the DPWH for slashing budgets for national projects while local ones had been provided additional funding, which he said does not jive with the administration’s budget theme of Reset, Rebound, and Recover.

He said the DPWH should not have made amendments to its budget since doing so is the sole function of Congress.

“The mangled version alone – which contained a pattern of decreased budgets for national projects and increased budgets for local projects – is highly questionable considering that such submission should have only detailed the lump sums in the NEP (National Expenditure Program) that Malacañang submitted to Congress last August 25, but not to amend what was originally submitted, which is the exclusive function of the Congress as part of the budget process, thus – Preparation, Authorization, Execution and Accountability,” he said. – With Jocelyn Montemayor and Raymond Africa