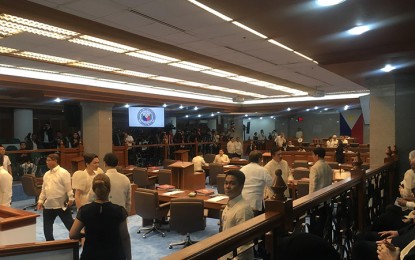 BY RAYMOND AFRICA and VICTOR REYES

AT least three senators have joined moves to conduct an investigation into the massive flooding in areas in Luzon at the height of typhoon “Ulysses.”

Vice President Leni Robredo called for an investigation on Monday as leaders of the House of Representatives filed a resolution calling for an inquiry into the flooding that submerged the provinces of Cagayan and Isabela and nearby areas.

A large part of Cagayan was flooded due to rains brought by Ulysses, compounded by the release of water from the Magat Dam.

The damage caused by the floods has prompted the National Disaster Risk Reduction and Management Council (NDRMMC) to recommend to President Duterte that Luzon be placed under a state of calamity. Mayors from the National Capital Region, and the Central Luzon, Calabarzon, and Cagayan Valley regions moved to have final authority in releasing water from dams.

Ulysses left 73 persons dead as of yesterday, up from Monday’s 67 on. The fatalities are from six regions in Luzon.

The NDRRMC said 24 of the fatalities are from Cagayan Valley, 17 from Calabarzon, 10 from the Cordillera Administrative Region, eight each from National Capital Region and Bicol, and six from Central Luzon.

Defense Secretary Delfin Lorenzana, also NDRRMC chairman, assured Cagayan residents that government will be there for them until they fully recover.

Isabela Gov. Rodolfo Albano floods in his province continue to recede. “We now on the road to recovery,” he said.

“But we have post-flood scenarios, dengue might set in, we need to clean (our areas), we have to strengthen the immunity of our people, buy vitamins, eggs and others, so they wont be infected by COVID, they wont get sick, get pneumonia,” said Albano.

Maj. Marco Antonio Magisa, spokesman of the AFP’s Northern Luzon Command, said there are no more flooded areas in Isabela.

In Tuguegarao City in Cagayan, Magisa said nine out of city’s total 49 barangays remained flooded as of 6:40 p.m. yesterday.

Magisa said could not immediate say the extent of current flooding in the 28 towns of Cagayan.

Senators Risa Hontiveros and Ramon Revilla Jr. have filed resolutions to investigate the cause of the severe flooding in Cagayan Valley region, Rizal province, Marikina City, and other parts of the country in a bid to create policies to better prepare the country for calamities.

Sen. Francis Pangilinan said he will file a resolution for a similar investigation.

Pangilinan said the proposed Senate inquiry will determine if protocols on releasing water from dams were strictly followed by proper authorities, among other concerns.

Hontiveros said the recent severe flooding in the country should be a wake-up call for the government to “take the consequences of exploiting nature seriously.”

“About 1.7 million Filipinos, many of whom are young children and senior citizens, are displaced and affected. Even worse, is that this happened in the middle of a pandemic in which lapses in physical distancing can mean life or death,” she said.

Revilla said the five weather disturbances that entered the country in the past weeks caused the Ipo, Ambuklao, Binga, and Magat dams in Luzon to reach critical water levels, and led to opening the gates of these dams. Although necessary, this decision has added to the volume of the flood in the low-lying areas near these dams, he said.

He also said about 3,880 families are still staying in evacuation centers as their houses are still under mud.

Some don’t even have homes to return to, as flood waters either washed or destroyed their houses, Teodoro said.

He said the Technical Education and Skills Development Authority vowed to provide skills training to those affected by the typhoon.

“Marikina City is now coordinating with big companies in the city as well as those outside the city to provide jobs to affected residents,” he also said.

The Metropolitan Manila Development Authority said it will help Marikina.

MMDA chairman Danilo Lim, who visited the city yesterday, said the agency will focus on clearing roads of debris.

Lim and Teodoro inspected Barangay Malanday, one of the areas severely hit by flood, and distributed face masks and shields, and relief bags containing sardines, noodles, and bottled water. — With Christian Oineza and Noel Talacay