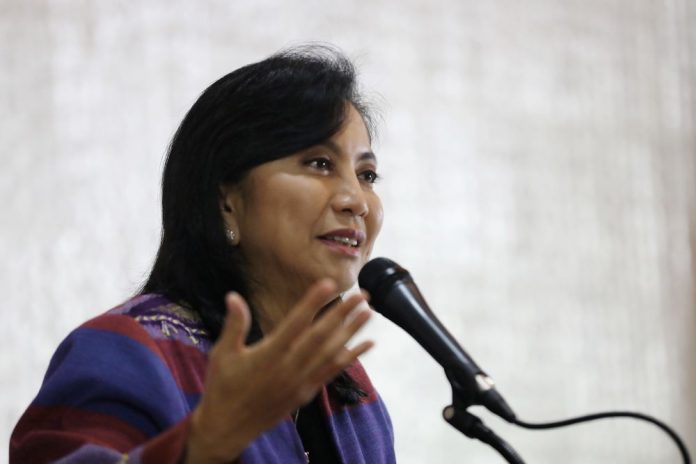 VICE President Leni Robredo yesterday urged Malacañang to do a better job of informing the public on the full effects of the COVID-19 vaccines amid fears that vaccines being developed by Chinese company Sinovac Biotech are potentially unsafe.

The company, which is among foreign firms that could supply vaccines to the Philippines, was earlier reported to have a record of bribing Chinese regulators.

Robredo said as long as the public does not know how safe the Sinovac vaccine is, many people will not want to be vaccinated.

“May concerns kasi sinasabi na iyong Sinovac, iyong galing sa China, mayroong mga ibang nagre-raise ng concerns (There are concerns that Sinovac, the one from China, there were some who raised concerns),” she said in her weekly radio program. “Dapat mag-exert ng effort para i-allay iyong fears ng mga tao (They have to exert to efforts to allay the people’s fears).”

Robredo cited concerns raised by Dr. Tony Leachon, a former member of government’s Inter-Agency Task Force (IATF), who earlier raised concerns about the safety and efficacy of the Sinovac vaccine which is still in the third phase of testing.

She said the corruption controversy hounding the company contributed to the people’s distrust in the China-made vaccine which is the primary one being eyed by President Duterte to be used next year to vaccinate the population.

The Washington Post last December 4 reported that Sinovac Biotech had been found to have a record of bribing Chinese drug regulators. The report said Sinovac’s CEO admitted to paying as much as $83,000 to a regulatory official between 2002 to 2011, covering the period when the then startup company was chosen to lead the development of vaccines for SARS, avian flu and swine flu.

The Vice President said the government has to get its act together and deliver a single message to the public to avoid fear and confusion, especially now that other countries have already started their vaccination programs.

Aside from Sinovac Biotech, the Philippines is also eyeing to source vaccines from China’s Sinopharm and CanSinoBio, US firm Pfizer Inc, British-Swedish company AstraZeneca, and Russia.

Ambassador to Washington Jose Manuel “Babe” Romualdez said he may be partly to blame for the delay in the delivery of Pfizer vaccines.

He said could have called up Health Secretary Francisco Duque III, who he said is a close friend, and asked him to sign and submit on time the confidentiality disclosure agreement (CDA) needed by Pfizer.

The CDA is needed to assure Pfizer that countries procuring its vaccine would not share the technology or processes behind its development to others.

Controversy about the Pfizer vaccines erupted last week after Foreign Affairs Secretary Teodoro Locsin Jr. said “somebody dropped the ball” in the negotiations for 10 million doses of COVID-19 vaccines, which Pfizer would have delivered by January.

Sen. Panfilo Lacson later named Duque who, he said, failed to sign on time the CDA needed by Pfizer, and cost the country the vaccines.

Duque has denied he botched the deal with Pfizer.

Locsin on Saturday said he has talked with US Secretary of State Mike Pompeo and the latter has committed to help the Philippines secure vaccines from Pfizer which is headquartered in the US.

Romualdez said despite the controversy, the procurement of vaccines from Pfizer “is still on track.”

Romualdez also said the country will also acquire vaccines from Moderna which was given by the US emergency use authorization last Friday.

He said the vaccine candidate developed by Novavax Inc. is also set to gain approval from the US FDA soon.

He expressed confidence the country will have enough COVID-19 vaccines by next year.

“It will be really coming to our shore by next year and we will have enough vaccines to choose from. Konting pasensiya na lang sa ating mga kababayan (A little more patience), but in the meantime, always follow the safety protocols. By next year gaganda na ang sitwasyon natin (By next year, the situation will improve),” he added.

Senate President Vicente “Tito” Sotto III opposed suggestions made on social media that politicians be the first ones to be administered the shots to test the vaccines’ efficacy.

He said in an interview over radio dwIZ that priority should be given to medical frontliners.

He also said politicians should pay for the vaccines because they have the money for it.

At least 200 companies and organizations are joining a private-sector led vaccine purchase program following the approval by AstraZeneca of a second batch of orders, which may also be the last, according to Joey Concepcion, presidential adviser on entrepreneurship.

Each dose is still at its base cost of $5.

It was not immediately known how many doses are in the second part.

“The more businesses involved in this project, the faster the ecosystem will be revived, thus, stimulating exchange. It is one answer to the question of how we get money flowing again – it will stop the bleeding,” he said.