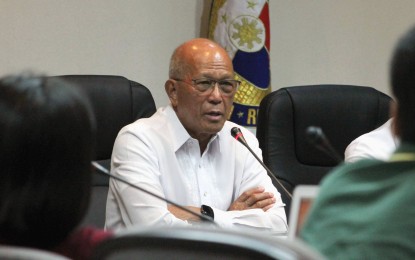 THE Armed Forces is investigating a military general who recently accused a journalist of being a propagandist of the communist movement, Defense Secretary Delfin Lorenzana said yesterday.

“We will investigate and find out if he deserves to be punished, disciplinary action will be imposed upon him,” Lorenzana said, referring to Lt. Gen. Antonio Parlade, chief of the military’s Southern Luzon Command and spokesman of the National Task Force to End Local Communist Armed Conflict.

Parlade last week said reporter Tetch Torres-Tupas of Inquirer.net is a propagandist and is aiding the terrorists, for writing an article about two Aetas who have been charged for violation of the Anti-Terrorism Act.

The Aetas claimed to have been tortured by the military into admitting they are members of the communist New People’s Army. They asked to Supreme Court to be allowed to intervene in petitions to declare the anti-terror law unconstitutional because they are the first to claim injury from the questioned law.

Reporters from other media outlets wrote about the Aeta story, also based on a petition filed before the Supreme Court on Tuesday last week, the same day the Supreme Court heard oral arguments on the Anti-Terrorism Act of 2020 whose constitutionality is being questioned.

“We will direct the AFP to do some investigation and inquiry to find out if he really made a mistake there,” said Lorenzana, referring to Parlade.

Incidentally, AFP chief Lt. Gen. Cirilito Sobejana said on Friday he has no authority over the matter because Parlade made the statement “in his capacity as the spokesperson of NTF-ELCAC.”

Sobejana said the NTF-ELCAC is a body higher than the Armed Forces. The task force is composed of several government agencies, including the AFP, and is headed by President Duterte, the AFP’s commander-in-chief.

Nevertheless, Sobejana urged military personnel to be “very deliberate” and to exercise “due diligence” in linking people to the communists “to avoid adverse comment from the public which we are sworn to serve.”

Last month, Lorenzana ordered the relief of a senior military official for negligence, following the release of an erroneous list of UP graduates who have supposedly joined the NPA. The release, which Lorenzana called an ““unforgivable lapse,” came amid tension between the DND and UP over an agreement barring the entry of soldiers and policemen in UP campuses without coordination with school officials.

Lorenzana, in the interview yesterday, said Parlade might have “overstepped what he was doing.”

“But I’m going to let the chief of staff deal with him. They (Sobejana and Parlade) should talk on how to address this concern from the journalist and from the media about this accusation by General Parlade.”

Nevertheless, Lorenzana said he understands where Parlade is coming from, noting that Parlade “has been fighting the insurgency all of his life as a military man.”

Lorenzana urged the media to seek the side of the military, including Parlade, when writing stories similar to that of the two Aetas which, Lorenzana said, was earlier found by the Armed Forces to be false.

“To me, there is a thin line between freedom of expression and aiding terrorists,” said Lorenzana, adding he feels sorry for Parlade for being criticized “when in fact, what he’s saying could be right.”

“We will talk to him closely and that’s why I have directed the chief of staff to talk to him about this so that we may be able to prevent this from happening in the future,” Lorenzana added.

Lorenzana also said he also understands Torres-Tupas, saying she may have been felt threatened or felt her life was in danger for the remarks of Parlade.

“I think these two sides should meet personally and discuss these things. Nothing could not be resolved by talking to each other… and maybe they will find out that both of them are correct,” he said.

Last week, the Justice and Court Reporters Association (JUCRA) condemned Parlade’s threat to sue to Torres-Tupas and demanded an apology from the general who has been under fire for red-tagging personalities, including those from the show business.