FIFTY more deaths were reported by the Department of Health yesterday while there were 14,941 more recoveries, raising the number of new coronavirus disease (COVID-19) survivors to 310,158.

In its latest bulletin, the DOH said there were 2,379 new cases, bringing the total number of infections in the country to 356,618.

Overall, the death toll has risen to 6,652. Majority of the new deaths were recorded in NCR with 31 while Central Luzon had 7 and CALABARZON 5.

The DOH had previously attributed the high number of recoveries to its “Oplan Recovery,” a program that monitors the status of confirmed COVID-19 cases with mild symptoms and those that are asymptomatic. 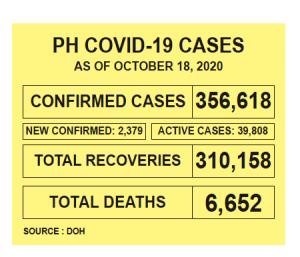 The “Oplan Recovery” uses the time-based recovery system, with those who have completed the 14-day isolation period and cleared by a physician tagged as having recovered despite not undergoing repeat RT-PCR testing.

PCOO data shows that as of October 18, there are 32 active cases, 122 recovered patients, and 3 deaths in the agency and its attached offices.

Meanwhile, three more overseas Filipinos were added to the list of those infected with the deadly virus, bringing the number to 11,149.

Of these, 7,199 have recovered, the Department of Foreign Affairs said. So far, 812 overseas Filipinos have died from the virus.

The Middle East and Africa still had the highest number of overseas Filipinos infected with COVID-19 while those who died of it stood at 7,364 and 529, respectively.

The Asia Pacific region reported 1,757 cases and 9 deaths while Europe recorded 1, 214 cases and 95 deaths. The Americas reported 814 cases and 179 deaths. – With Jocelyn Montemayor and Ashzel Hachero

BCN has a new home