TYPHOON “Quinta” twice made landfall yesterday in the Bicol region as signal warnings were up in 36 areas in Luzon and the Visayas.

Metro Manila was under signal No. 1.

Thousands of residents in the Bicol and Calabarzon regions have been evacuated ahead of the anticipated landfall.

As of 7 p.m yesterday, Quinta at the vicinity of Malinao, Albay. It was moving westward at 25 kph, packing maximum sustained winds of 130 kph near the center and gustiness of up to 180 kph. 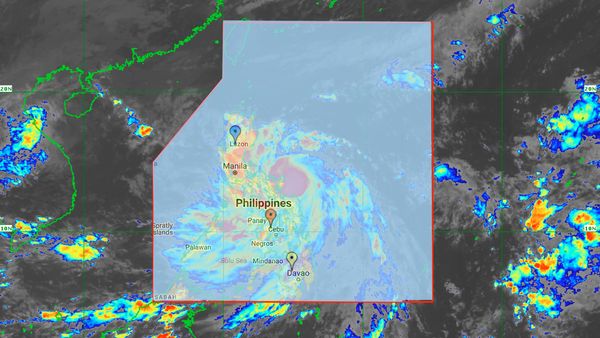 It is forecast to exit the Philippine area of responsibility tomorrow.

The Philippine Atmospheric, Geophysical and Astronomical Services Administration (PAGASA) said Quinta first made a landfall in San Miguel Island in Tabaco City, Albay at around 6:10 p.m. last night. The second landfall was in Malinao, Albay at 6:50 p.m.

Eight areas were under Signal No. 2 — Masbate, central portion of Quezon including Polillo Islands, Cavite, rest of Laguna, rest of Romblon, rest of Oriental Mindoro, rest of Occidental Mindoro and Northern Samar. PAGASA said Quinta will continue intensifying in the West Philippine Sea after crossing the Philippine archipelago.

Mark Timbal, spokesman of the National Disaster Risk Reduction and Management Council, said 2,407 families or 8,939 persons from 33 barangays in the Bicol region have been evacuated as of 5 p.m. yesterday.

Earlier yesterday, the Office of Civil Defense-Bicol said 680 passengers and 288 rolling cargoes were stranded in the ports of Albay, Camarines Sur, Masbate and Sorsogon.

The OCD-Calabarzon reported a minimal number of people preemptively evacuated as of noon yesterday. It said 10 families or 42 persons from Laguna were evacuated. It also said 159 passengers and 187 rolling cargoes are also stranded in the ports of Batangas and Quezon.

Timbal said Eastern Visayas also experienced the effects of Quinta hours before the landfall, including the damage of a bridge in Naval, Biliran due to flooding.

In Catbalogan City in Samar, flooding was reported at a national road in Barangay Mercedes, leaving it unpassable to all types of vehicles, Timbal said.

He said landslides were also reported in Barangay Nabang in Catbalogan City and in Barangay Jia-an in Jiabong town, also Samar.

Timbal said 668 passengers and 276 rolling cargoes were stranded in the port of Allen, Northern Samar.