Roxas said the Navy began work on the ship on April 5 or two days after President Duterte ordered the Navy to transform BRP Ang Pangulo into a hospital ship amid the increasing number of COVID-19 cases.

Roxas said personnel aboard the ship built medical ward and patient rooms that can accommodate 28 patients and five medical personnel.

“Three exclusive compartments were prepared by PN personnel for the patients with temporary division in place observing three-meter distance between them. Patients and medical staff are given different access points,” said Roxas. 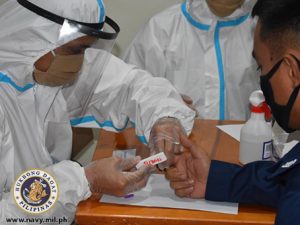 Roxas said crew members of the BRP Ang Pangulo will remain on board while the ship is used as a quarantine facility. He said the crew members have been provided with personal protective equipment and subjected to rapid antibody test.

“All entry points from the crew’s billeting area and other compartments from the temporary medical facility and patient rooms were already sealed off,”  Roxas also said.