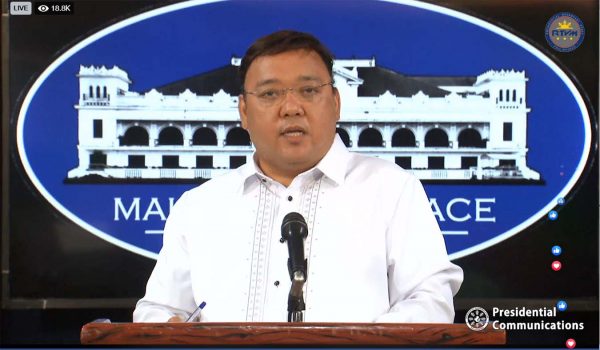 PRESIDENTIAL spokesman Harry Roque yesterday put forward an interesting theory: that American marine Joseph Scott Pemberton was granted absolute pardon by President Duterte in the hope that the county would gain access to vaccines for the coronavirus disease (COVID-19) being developed by the United States.

Roque, a former lawyer of the family of transgender Jennifer Laude who was killed by Pemberton in 2014 in Olongapo City, stressed this was his “personal” stand or assessment of the situation based on the many previous pronouncements of the President.

Last Monday, Duterte shocked the country when he granted absolute pardon to Pemberton hours after a motion for consideration against the early release of the American from detention filed by the Laude family was heard by the same Olongapo court that meted him a 10-year maximum sentence in 2015 for homicide.

Duterte, during his weekly address on Monday, said pardoning Pemberton was the fair thing to do since he had served his sentence. He said that after listening to different reports and debates about Pemberton and his own assessment of the situation he concluded that the US soldier had not been treated fairly.

Vice President Leni Robredo and other critics slammed Duterte’s decision, saying it was another proof of the government’s bias to the wealthy and the influential.

Critics also said the pardon was a going-away present for US Ambassador Sung Kim, who called on Duterte at Malacanang last Monday. This was denied by Chief Presidential Legal Counsel Salvador Panelo who described the call as a “social” event.

Roque said he was not consulted by Duterte about the pardon, adding there was never a discussion about Pemberton between him and the President. He also said he respects the decision of the Chief Executive.

He added he was not surprised by the decision because he believes the President was thinking of what is best for the national interest of the country and the Filipinos in general.
Roque clarified that he could be wrong with his assessment, but added it is his personal opinion.

He added that despite the pardon, and the opposition of some sectors, including the Laude family, justice had been served because Pemberton was convicted and had served part of his sentence and paid civil damages to the Laudes.

He also said the pardon does not erase the fact that Pemberton had been convicted for killing Laude, adding Pemberton’s military service may even be compromised because of his conviction.

(Jennifer Laude was not sacrificed because we obtained justice– we had Pemberton jailed, and he paid more than P4 million in damages to the family),” he said.

Roque said a copy of the pardon had been received by Pemberton’s camp and the Bureau of Corrections.

The BuCor, meanwhile, said it has started processing the release of Pemberton “in coordination with relevant agencies that are involved in the process.”

The agency on Wednesday said it took new mug shots and fingerprints of Pemberton in his detention cell at Camp Aguinaldo to upgrade its records on the American marine.

On Wednesday, Immigration Commission Jaime Morente said he had asked BuCor Director General Gerard Bantag to turn Pemberton over to them after his release so he could be deported.

Pemberton is the subject of a summary deportation order issued by the BI Board of Commissioners in September 2015 for being an undesirable alien. He was also be placed in the immigration’s blacklist.

DOJ Undersecretary Markk Perete said it might take at least one or two days for the BuCor to process the documents needed for Pemberton’s release. He added it would also depend on the compliance of his lawyers with the required documents.

“If they have completed the paperwork and complied with the requirements, then the BuCor is looking at a time frame of one or two days,” Perete said, adding Pemberton would then be turned over to the BI for deportation.

“Just like the other deportees, he would not be handcuffed. The only requirement is he would be escorted by immigration personnel to the aircraft to make sure that he would be leaving the country,” he said.

Justice Secretary Menardo Guevarra said Pemberton’s actual departure will depend on the flight arrangements considering that he is still a US military service member.

“The official process of release and deportation can be completed by the weekend, but the date of Pemberton’s actual exit from the country depends on his flight arrangements, considering that he is a military personnel of the US,” Guevarra said in a text message. – With Ashzel Hachero