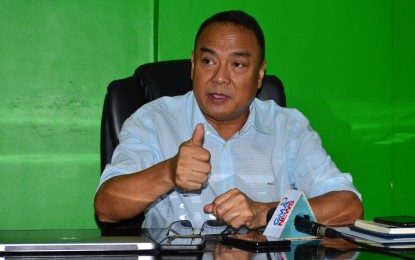 BY VICTOR REYES and RAYMOND AFRICA

THE chief of the Philippine Drug Enforcement Agency wants the death penalty for persons caught trafficking at least a kilo of shabu.

PDEA chief Wilkins Villanueva said the death penalty will prevent people from getting involved in the illegal drug trade.

“It should also save our future generations from the dangers posed by dangerous drugs,” he said as he expressed support for President Duterte’s call to revive the death penalty by lethal injection for drug crimes.

During his fifth State of the Nation Address on Monday, President Duterte urged lawmakers to pass the death penalty revival bill which will allow death via lethal injection for crimes specified under the Comprehensive Dangerous Drugs Act of 2002.

The death penalty was abolished in the 1987 Constitution but was reimposed in 1993 by the Ramos administration. It was again abolished in 2006 by the Arroyo administration.
Villanueva said the capital punishment should be handed to big-time traffickers only.

“Execution by lethal injection is for big-time drug traffickers, and not for the street-level pushers. I strongly suggest that seized drugs weighing one kilogram or more should be the threshold amount,” he said.

The current punishment for possession of at least a kilo of shabu is life imprisonment.

Villanueva said protectors of foreigners and Filipino drug traffickers who are found guilty of manufacturing, trafficking, and pushing of dangerous drugs should also be meted the capital punishment.

“Tougher penalties will send a clear message and force them to have second thoughts before smuggling and trafficking illegal drugs. They have the luxury to operate in our country without worry because the maximum penalty on our laws is less harsh,” he said.

Villanueva said the absence of death penalty “is favorable for drug peddlers who continue their nefarious activities despite being in detention.”

Villanueva said that while authorities have arrested drug traffickers, these suspects have not stopped their trade even while in detention.

“We have intercepted drug transactions perpetrated by convicted high-profile inmates while inside the national penitentiaries. They have found ways to communicate with the outside world one way or the other, and give direct orders to people involved in the illegal drug trade,” Villanueva said.

On Monday night, Interior Secretary Eduardo Año said he supports President Duterte’s call, made during the State of the Nation Address, to reinstate death penalty. “This has been long overdue. We need to pass it in order to reinforce our fight against illegal drugs.”

Año noted the Philippines is the only country is Asia with no death penalty.

“Almost all heinous crimes committed are related with the use of illegal drugs. This is an important deterrence to criminals to stop drug trafficking. So many lives have been wasted because of drugs,” said Año.

Senate President Vicente Sotto III said he will support the revival of the death penalty on the condition that it will be applicable only to high-level drug traffickers.

Sotto, in an interview with ANC, said re-imposing the death penalty for all drug offenders will be anti-poor as the latter cannot afford high-caliber lawyers due to financial constraints while high-level drug traffickers can afford one due to the income from illegal drugs.

Under the bill which is pending at the Senate committee on justice, high-level drug traffickers will be jailed in regional penitentiaries to be established in Nueva Ecija for convicts from Luzon, Capiz for convicts form the Visayas, and Davao for convicts from Mindanao.

Sotto said the proposal to have regional penitentiaries came up so that relatives of high-level convicts can still visit them unlike when they are all jailed at the New Bilibid Prison in Muntinlupa where relatives of convicts from the Visayas and Mindanao will have a hard time visiting them.

He said isolating high-level drug traffickers from the rest of the inmates will have an effect of a “death penalty.”

Sotto, however, said the revival of the death penalty stands a 50-50 chance in the Senate as some senators express different views on the issue.

Senate minority leader Franklin Drilon said he opposes the revival of the death penalty due to deficiencies in the justice system.

“I just want to say that I have consistently opposed the imposition of the death penalty because of our deficiencies in our justice system. You make a mistake in imposing the death penalty, you can never correct that mistake,” Drilon told ANC.

Drilon said it is best for the government to first reform the justice system before lawmakers revive the death penalty.

Several bills have been filed at the Senate for the revival of the death penalty. They are now pending at the committee level.

Sen. Panfilo Lacson, a former PNP chief, said the revival of the death penalty will be a deterrent to crimes.

“Having served as a law enforcer in my previous life, I have good enough basis to believe that the re-imposition of the death penalty is a deterrent to crime and an encouragement to victims to come forward an seek justice,” Lacson said.

“Just like the Anti Terrorism Act of 2020, timing is of no moment when we are dealing with heinous crimes and crimes against humanity,” he added.

The Integrated Bar of the Philippines said it would be better to improve the justice system than re-impose the death penalty.

IBP national president Domingo Cayosa said the certainty of punishment brought by an improved justice system is more than enough crime deterrent than the death penalty.

“What is more important is for our country, for our government to improve the delivery of justice. Take away the corruption in our justice system, take away the delay, take away the undue influence and the lack of personnel so that when people are accused of crimes, it’s certain that they will be arrested, they will be prosecuted, given due process and sooner than later, they will be meted out the penalty,” Cayosa said on GMA News; Balitanghali.

Cayosa said the certainty that the perpetrator will be arrested and punished is the main deterrent to crime.

human lives above all and not dodging the obligation to fight for human rights,” said CHR spokeswoman Jacqueline Ann de Guia.

De Guia said CHR has, time and again, invited the government “to engage in a frank and factual discussion on the ineffectiveness of death penalty in curbing crimes.”

“We too believe that crimes must be punished. But the call for justice should not result in further violations of human rights, especially the right to life,” said De Guia.

“CHR wishes to stress that any move to reinstate capital punishment in the country conflicts with the tenets of the Second Optional Protocol to the International Covenant on Civil and Political Rights, which the Philippines ratified in 2007,” said De Guia.

Members of the Catholic Bishops Conference of the Philippines (CBCP) rejected anew the revival of the death penalty.

Bishop Joel Baylon, chairman of the CBCP Commission on Prison Pastoral Care, said the Church will always be against capital punishment which “is never a deterrent to crime” based on studies and goes against the teachings of the Church, which is restorative justice.

“With the death penalty, justice is nothing but punishment, and never a way to reform the offender. But true justice is restorative, never punitive,” said Baylon.

Bishop Ruperto Santos, vice chairman of the CBCP Commission on Migrants and Itinerant People, “God is the author of life. We owe our life to Him. God gives life, so it is only God to take life.”

Santos also said having the death penalty will not help overseas Filipinos who will be found to have violated laws of the host countries.

“How can we appeal to a foreign country for our co-national sentenced to death penalty for life commutation or amnesty if we practice death penalty? With death penalty, we lose the moral authority and credibility to beg for the life, to save lives of our imprisoned OFWs,” said Santos. — With Ashzel Hachero and Gerard Naval