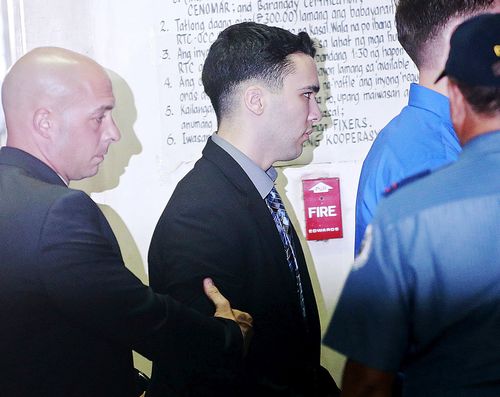 AMERICAN Marine Joseph Scott Pemberton held his emotion in check when he was told that President Duterte had granted him absolute pardon but it was clear that, after spending six years in detention, he is more than elated to be a free man anew.

This was relayed by Pemberton’s lawyer, Rowena Garcia Flores, who said yesterday that she talked to the American on the phone on Monday night after she was able to confirm that Duterte had indeed given her client his walking papers.

“He wouldn’t really tell you long sentences and he also wouldn’t discuss in details his emotion, but I could hear, I could sense that he was very happy from his voice,” Flores said in a phone interview.

She added she had no clue why Duterte granted the pardon, adding that Pemberton did not apply for it.

Flores said she talked to Pemberton using the phone of one of his American security personnel detailed at the JUSMAG detention facility inside Camp Aguinaldo.

Flores said Pemberton was also “very sorry that all these things happened,” adding he is a spiritual man. She said Pemberton’s family is composed of Christians, has a Bible in his detention cell and even highlights verses that he likes.

Asked if Pemberton would offer an apology to the family of transgender Jennifer Laude, whom he killed in 2014 in an Olongapo hotel, Flores said she still needs to talk to her client about this. She added she would rather have him do it in writing so he “can be more deliberate with his words.”

“I will talk to him about that. We will discuss it,” she said.

In an interview with ABS-CBN News Channel, Flores said Pemberton plans to go to college when he returns to the United States.

“He is looking to go to college. He plans to support himself through college,” she said.

A native of New Bedford, Massachusetts, Pemberton was 19 years old when he killed Laude after he discovered she was a transgender.

Pemberton was an anti-tank missileman with the 2nd Battalion, 9th US Marines, and was in the country to participate in the 2014 Balikatan exercises between US troops and their Filipino counterparts when he committed the crime, for which has was sentenced to a maximum of ten years. He served six.

Flores also denied that Pemberton was given special treatment while in detention, adding he was inside his cell the whole time. She added he was visited by her parents once or twice in 2015.

Flores said she is now working to iron out the process to enable Pemberton to walk out of jail this week.

She said Pemberton will not be spirited out of the country and will comply with the needed requirements.

The lawyer of the Laude family, Virgie Suarez, had slammed the grant of pardon to Pemberton, saying it was a travesty of justice and makes a mockery of the country’s judicial system.

She also said it shows that Filipinos are still being treated as second class citizens in their own country.

Justice Secretary Menardo Guevarra said no deportation order for Pemberton is necessary from the Bureau of Immigration.

“The court will just lift the hold departure order, if any was issued, and Immigration will simply let Pemberton depart. I’m not privy to Pemberton’s departure details but since he is a US military personnel, there may be a different mode of transporting him out of the country,” Guevarra said.

Asked if he has any directive to the Bureau of Corrections for Pemberton’s release, Guevarra said he has none since “the Presidential pardon is enough to trigger the issuance of release order from the BuCor.”

Guevarra said the same procedure has been applied to other prisoners who have been granted pardon.