BY JOCELYN MONTEMAYOR and RAYMOND AFRICA

PRESIDENT Duterte has given the new chief of the Philippine Health Insurance Corporation (PhilHealth) until December to clean up the agency, including removing erring officials and firing them, presidential spokesman Harry Roque said yesterday.

The deadline was given by Duterte on Wednesday night during a meeting with Senate President Vicente Sotto III, Speaker Alan Peter Cayetano, House majority leader Martin Romualdez and Sen. Christopher Go, during which he expressed frustration over corruption in the state insurance firm and talked about abolishing or privatizing the agency. 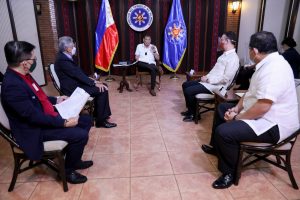 Sotto said the meeting was about further amending the anti-red tape and ease of doing business laws.

“He (Duterte) said he wanted PhilHealth abolished or privatized, but I said it might be better to wait a few months and see how the new administration performs,” Sotto said.

Go confirmed that Gierran, former NBI head, has been given until the end of the year to clean up PhilHealth or the agency will face “disbanding.”

The new PhilHealth president and CEO, Dante Gierran, has yet to formally assume the post, replacing Ricardo Morales who resigned amid allegations of massive corruption in the agency.

Cayetano said the President made it clear during the meeting that the enemy in this time of pandemic is not only COVID-19 but also “the heartless bureaucracy that has made life unbearable for many of our kababayans.”

He also said Duterte wants Congress to work for the passage of measures to cut red tape because it is “choking the life our of our economy and people.”

“He agreed to my proposal. I explained that PhilHealth is an insurance corporation, and not a health entity,” he said.

Sotto said he waited for Duterte to open a topic on Health Secretary Francisco Duque III, PhilHealth board chairman, during the meeting but that did not happen.

The Senate Committee of the Whole has recommended charges against Duque for the anomalies at PhilHealth but a task force led by Justice Secretary Menardo Guevarra recommended only that he be admonished.

“I was ready to talk about it but he did not bring the name up,” Sotto said.

Duterte has been defending Duque from calls to sack the secretary, including from senators. Sotto has been very vocal against Duque, saying he should be included among officials recommended by the task force for administrative and criminal cases. Without naming the task force, Sotto on Wednesday warned agencies that will ignore the Senate’s recommendations of strict budget scrutiny.

Guevarra, in an interview with CNN, said Duque was not included in the list of officials to be charged because the task force has not seen enough evidence against him.

Guevarra on Wednesday said composite teams composed of representatives from the DOJ, NBI, Presidential Anti-Corruption Commission, and the Office of the Special Assistant to the President will continue their investigation on PhilHealth.

On an alleged mafia behind anomalies at PhilHealth, Guevarra said based on the task force’s probe, the anomalous transactions that have allegedly led to the loss of billions in funds of the state insurer could not have been done by one person alone.

Because all these irregularities or anomalies involving large sums of money could not have been perpetrated by one or two persons alone),” Guevarra said in an interview over CNN Philippines.

Guevarra said there is a “culture of tolerance or culture of cooperation” in PhilHealth that allowed fraud and corruption to happen.

Guevarra, in a briefing, said investigations would take at least two months more.
He also said the task force aims to file the administrative and criminal cases in the next 30 days.

“The evidence available to us will be enough to support both an administrative and a criminal complaint. But, we’re beefing it up … because there are documents that we still need to get. We know that they are there but we still have to get them,” Guevarra said in mixed English and Filipino.

Guevarra reiterated that Duque and the members of the board are not yet off the hook. – With Ashzel Hachero and Wendell Vigilia