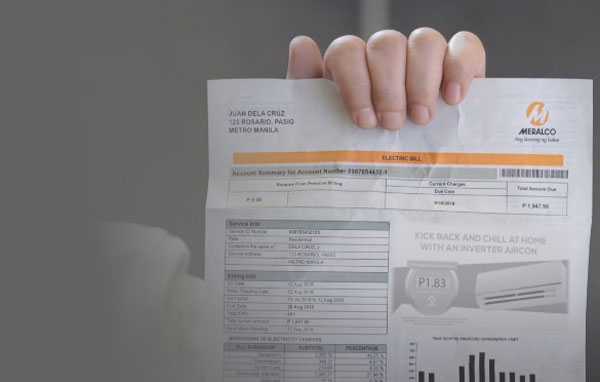 LISTED power distribution firm Manila Electric Co. (Meralco) yesterday said it will continue to waive and shoulder the P47 convenience fee that is being charged by third party platforms to customers who use their mobile application and website to pay their bills.

Meralco started waiving the collection of the convenience fee while Metro Manila was under enhanced community quarantine (ECQ).

Meralco president and chief executive officer Ray Espinosa told senators in a virtual hearing conducted by the Senate energy committee that it is extending the non-payment of the convenience fee even if Metro Manila has already been downgraded to general community quarantine.

Espinosa said the waiving of fees will not be passed on to consumers.

He added that the company is already studying measures to permanently lower, if not totally free up such convenience fees as the waiving and shouldering of the amount will mean an additional operating expense to them.

Espinosa also highlighted that PayMaya and Meralco’s website are not the only payment channels available for customers as banks’ own payment systems can also be used which are not charging any convenience fees.

Likewise, Meralco said that customers who already paid their total bills in full during the ECQ can still ask for an installment payment plan. He, however, noted that such requests will be entertained in business centers as the refund will be given in cash.

Espinosa stated that they are aware of the fact that queues in business centers may now be longer than the usual, which led them to implement three separate lines for those who will pay, for those who have questions on their bills, and for those who are requesting for a refund and an installment payment plan.

He also reiterated that Meralco is implementing a moratorium on service disconnection until September 30 this year.

Sen. Sherwin Gatchalian, chairman of the Senate energy committee, lashed out at Meralco for its unclear computations on the electric bill incurred by its customers during the lockdown period.

Gatchaliann said he could not understand how Meralco came up with the billing on his condominium unit when he stayed there for only 17 days during the ECQ period.

Gatchalian presented his electric bill during yesterday’s Senate hearing to ask Meralco how it arrived at such amount.

Gatchalian said he was not the only one who experienced the “bill shock” as his office has been flooded by many complaints which are similar in nature.

“Today we want to go deeper into the consumer issues, in particular the bill shock that a lot of people experienced and at the end, we would like to understand how did Meralco and the other utilities computed our bills in the last three months especially during the ECQ,” he said.

Victor Genuino, Meralco first vice president and head of customer retail services and corporate communications, said Gatchalian was not overcharged during the months of March and April.

During the ECQ period, Meralco was not able to dispatch its meter readers and based a customer’s consumption for the months of March and April based on his/her average monthly consumption.

“Your consumption in the month of May is actually lower. So it means that what happened during that period was that anything that was overly estimated in March and April was already adjusted in your May consumption,” Genuino said.

Gatchalian, however, said that such deductions were not properly explained in the billing statements, which made it for Meralco costumers like him to be more confused.

ERC chairman Agnes Devanadera said the commission has already received more than 47,000 complaints on electric bills from Meralco and other distributors during the ECQ period.

Genuino apologized for not including the detailed computation of adjustments in the electric bills.

“Your apology goes a long way but we expect corrections to the benefit of our consumers,” Gatchalian said.

Gatchalian said he expects Meralco to issue explanatory letters to its more than 6.5 million customers “clearly explaining their Meralco bill by way of aggregating the estimates and actual reading conducted that month.”

Gatchalian also asked the Energy Regulatory Commission to give the Senate committee updates on the bills corrections and refund for overpayment of customers of Meralco and other power distributors. – With Raymond Africa

Westbrook, Rockets get by Bucks