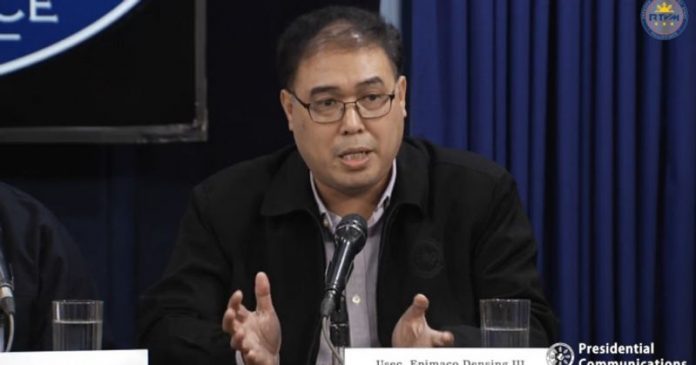 MEDIA entities supposedly overplayed the reaction of Interior undersecretary for operations Epimaco Densing III to the viral video “lugaw is essential” episode in Bulacan province during the initial implementation of the enhanced community quarantine (ECQ) in the NCR Plus bubble.

Densing said the media blew up his statement about Vice President Leni Robredo being a non-essential lugaw, or rice porridge.

“That was only two percent so it was blown out by media. I can do nothing about that,” Densing said, adding: “They are in control, they control how media works, what they want to emphasize for the public to have an uproar or to react on it. So that’s how our media works.”

Densing has been criticized for politicking the issue when he took a shot at the Vice President whose supporters sold lugaw to fund her campaign during the 2016 elections.

The DILG official said barangay tanod Pez Raymundo was right when she said that “si lugaw,” with emphasis on the “si” which referred to a person, was non-essential. Densing’s comment drew flak from various sector.

Densing was reacting to a video that went viral on various social media platforms where Raymundo was seen stopping Grab delivery rider Marvin Ignacio from completing the delivery of a package of lugaw (rice porridge) to a resident. Raymundo repeatedly told Ignacio that she cannot allow him to cross the checkpoint because his delivery was not considered as essential food.

Malacañang and DILG officials have said the driver should have been allowed passage because he was considered an essential worker and lugaw was an essential food.

Raymundo has since apologized to the public and delivery driver Ignacio for the blooper.

Densing said his earlier remarks was prompted by “unvetted” statements made by Robredo on the government’s response to the COVID-19 pandemic.

In other countries, Densing said administration and opposition leaders work hand in hand in addressing the pandemic but “it seems in our country, instead of the opposition helping out and encouraging, even us government workers, to continue to work, I think we are being discouraged by attacking what we are doing.”

Citing an example, Densing said Robredo was wrong when she said the government should have consulted local government units before easing travel restrictions a few months back.

“She didn’t even vet that I met with the governors and the mayors, got their inputs and even let them speak their piece in the IATF (Inter-Agency Task for the Management of Emerging Infectious Diseases) before the standard protocols of travel were issued. So in other words, these are statements that are unfair to us working in government. We need to be inspired and encouraged right now,” he said.

He said the government is willing to accept criticisms “as long as it’s true and its verified.”

“So in other words what we need right now are encouragement, not criticism,” he added.

Pending mining applications may be subject to new rules

How a WHO push for global vaccines needled Europe