FOR 14 long years, former cult leader-turned politician Ruben Ecleo Jr. evaded arrest for a graft conviction and the murder of his wife.

Yesterday, the long arm of the law finally caught up with Ecleo in San Fernando, Pampanga, where he had been living under an assumed name and enjoying life, probably thinking that he had outwitted the best intelligence minds in the country.

But his past came to haunt him, a resident of Dinagat Islands — until 2006 a part of the province of Surigao del Norte, where he served as mayor in the early ‘90s — squealed on him, telling police that Ecleo left the island about six years ago and went to Metro Manila.

National Capital Region Police Office chief Maj. Gen. Debold Sinas said “the informant came from Dinagat Islands, proceeded to Manila and coordinated with our operatives to give us an idea where Ecleo is residing.” Sinas said Ecleo’s capture is the product of six months of intelligence operation.

At 4:30 a.m. yesterday, Ecleo’s good life at the Diamond Subdivision in Barangay Balibago, Angeles City, where everybody knew him as Manuel Riberal, ended as operatives from the NCRPO’s Regional Intelligence Division-Special Operations Group and Regional Mobile Force Battalion swooped down on his residence armed with a warrant issued by the 1st Division of the Sandiganbayan.

The informant stands to earn P2 million, the bounty offered by the Department of Interior and Local Government for the arrest of Ecleo, now 60, the country’s No. 1 most wanted person. 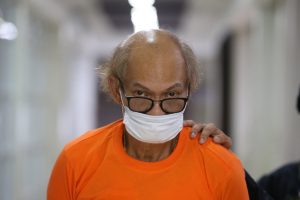 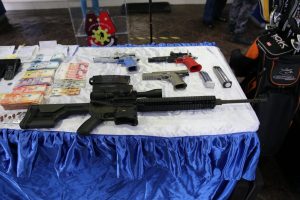 Ecleo served as the “supreme leader” of the Philippine Benevolent Missionaries Association Incorporated, a cult masquerading as a non-sectarian and non-profit charitable religious fraternal organization founded by his late father, Ruben Edera Ecleo Sr., in 1965 on Dinagat Islands.

The two were brought to the NCRPO headquarters in Camp Bagong Diwa, Taguig City.

Seized from Ecleo were a van registered under his alias, a golf set, fake identification cards, three cellular phones, jewelry, and P173,000 in cash. Ecleo also surrendered three handguns and an M16 rifle after his arrest.

“He said Ecleo’s arrest should send the chilling message to all other fugitives: You can run but you cannot hide from the PNP. We will put you behind bars,” Banac quoted the PNP chief as saying.

Ecleo was convicted of graft in October 2006 by the Sandiganbayan and sentenced to 31-and-and-a-half years of imprisonment over the anomalous construction of a public market and municipal building and the repair and rehabilitation of a building owned by his family’s cult when he served as mayor of San Jose, Dinagat Islands from 1991 to 1994.

He was elected as representative of the lone district of Dinagat in 2010 but he was dropped from the rolls of the House of Representatives in 2012 for his 2006 graft conviction.

Ecleo was convicted of parricide by a Cebu court in 2012, a decade after the body of his wife, Alona Bacolod-Ecleo, was found in a trash bag dumped in a ravine in Dalaguete, Cebu. Police said Alona was strangled to death at their home in Cebu City in January 2002.

Police stormed the Ecleo residence on Dinagat Islands six months after Alona’s remains were found. An ensuing shootout between authorities and members of his cult left a policeman and 16 cult members dead.

After the shootout, Ecleo surrendered and was imprisoned at the Cebu City Jail. But he was released after posting a bail of P1 million on humanitarian grounds. In April 2011, his bail was canceled and a new warrant for his arrest was issued after Ecleo failed to attend hearings on his parricide case.