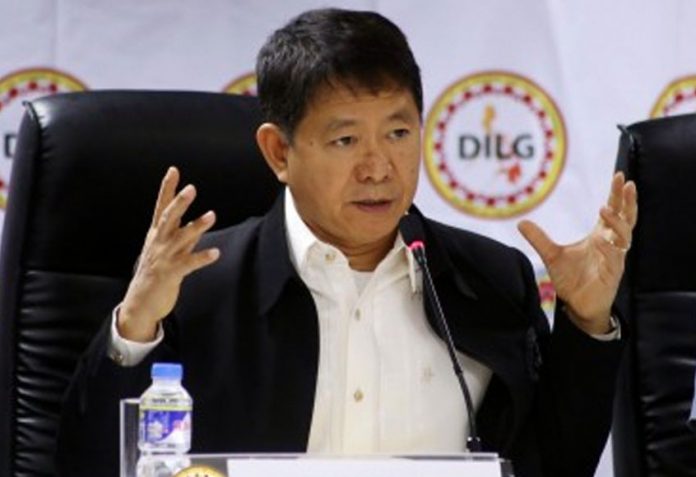 INTERIOR Secretary Eduardo Año yesterday warned Metro Manila may be placed under lockdown again if coronavirus disease (COVID-19) cases in the region continue to climb during the holiday season.

Año said: “If there is a sudden spike, we have no other recourse but to go on lockdown.”

Metro Manila was placed under strict lockdown from March 18 to May 31 this year as a strategy to stop the spread of the coronavirus. It slowly graduated to general community quarantine when cases started to fall and businesses were allowed to resume partial operations.

Año clarified that Metro Manila remains under relaxed GCQ and that any changes in the community quarantine of the region will still have to be discussed by the Inter-Agency Task Force on the Management of Emerging Infectious Diseases (IATF-EID) with the Metro Manila Commission (MMC) and approved by President Duterte.

“Our total daily cases is increasing so tonight we will be having a meeting with the mayors of the National Capital Region… and we will come up with active measures. If we are not going to do this, we will not be only talking about spike,” said Año.

To back his warning, Año cited records from the Department of Health (DOH) showing that the daily COVID-19 cases in Metro Manila has been around 1,400 for the past weeks and “we don’t want this to increase to 4,000 a day…so we really have to closely monitor this.”

Año said local executives will play active roles in ensuring the strict implementation of safety protocols, among them the mandatory wearing of face masks and shields when in public places, and the observance of physical distancing, among others.

He said: “Our LGUs have to be active, down to the barangays, they should be visible (in the streets) and with their megaphones, go around their communities to inform the people to observe COVID-19 protocols.

“And the malls and other establishments which are not observing physical distancing, the suspension of their business permits should be considered. If they cannot enforce it, it’s better if they themselves should close their establishments because that (non-observance of physical distancing) is a possible source of spike (in COVID cases),” said Año.

Cabinet Secretary Karlo Nograles, in a separate radio interview, said the IATF is expected to meet again on December 28 and come up with a recommendation on the community quarantine status in different parts of the country and submit it to President Duterte for approval.

Nograles said the current status of the COVID-19 cases in different areas would be discussed and the decision of the IATF would be forwarded to local government concerned to give them a day to appeal before the final recommendation is submitted to the President for approval.

He said the new quarantine status for January is likely to be announced by the President on the 30th or 31st of December.

“We will be meeting after Christmas, we will have a meeting and before January, maybe by December 31, the President will have a decision for January. It’s like that, we go by month by month,” he said.

In an interview with radio DzRH, Nograles said local government units can still declare localized lockdowns in their area, if needed, but it would only cover smaller areas like a street or a building and not the entire city or municipality or even region.

Nograles said while local government units had been directed to issue the implementing guidelines and ordnances to implement the mandatory use of face mask in their areas, authorities may use the Republic Act No. 11332 or the “Mandatory Reporting of Notifiable Diseases and Health Events of Public Health Concern Act” for now as basis for accosting those who would continue to violate the IATF policies and guidelines.

Under Section 9 of RA 11332, among the possible violations of the said law include, the “non-cooperation of the person or entities identified as having the notifiable disease, or affected by the health event of public concern.”

Section 10 of eh same law states that the penalties include a fine of P20,000 to P50,000 or imprisonment of one to six months or both.

Nograles reminded the public of the importance of complying with the minimum health protocols to protect oneself from contracting COVID-19.

He said that the use of a face shield in addition to a face mask, for instance, can raise one’s protection from the COVID-19 to 99 percent. He reminded us that the face shield should be used to cover one’s face and not the head.

Año, Lorenzana and police officials belied reports that spread over the weekend that NCR had shifted to the stricter modified enhanced community quarantine (MECQ) last Saturday, from its current status of GCQ.

“That’s not true because there is no instruction coming from the IATF,” said Año, adding that it is the IATF which has the authority to declare that, upon approval by President Duterte. “That’s fake news,” added Año.

NCR’s supposed shift to MECQ was contained in a memorandum allegedly from National Capital Region Police Office (NCRPO) chief Brig. Gen. Vicente Danao which called for a “covert deployment” for the implementation of supposed MECQ in the region. Metro Manila is currently under general community quarantine until Dec. 31.

Año said the memorandum was not official, adding the PNP is now conducting an investigation who spread the fake news.

“This is not true,” said Lorenzana, adding: “As the President had earlier announced, Metro Manila shall remain under General Community Quarantine until the end of the year. Neither the IATF nor the mayors of Metro Manila recommended any shift in the quarantine status in this period.”

Lorenzana said the situation in Metro Manila “is stable and manageable and does not warrant a shift back to MECQ.”

“However, we appeal for the public’s cooperation in observing the health protocols we have in place, such as wearing of masks and face shields in public, washing of hands and practicing social distancing. Let us avoid going to crowded places and holding social gatherings in the meantime to help prevent a possible surge in cases during this holiday season,” said Lorenzana.

Lorenzana said the threat of the pandemic “is still very much a threat to our public health and safety. Let us not be complacent.”

“We are having that investigated,” Binag said of the spread of the fake document. “But we want to assure the public, calm the public, that is fake news,” said Binag.

Danao said: “Actually, it is an unsigned memo. So, definitely it is not an official document.

It is only the IATF that can make an announcement like this. If we have any say on the matter, definitely that will only be a recommendation… so the memo that came out is a fake news.” – With Jocelyn Montemayor