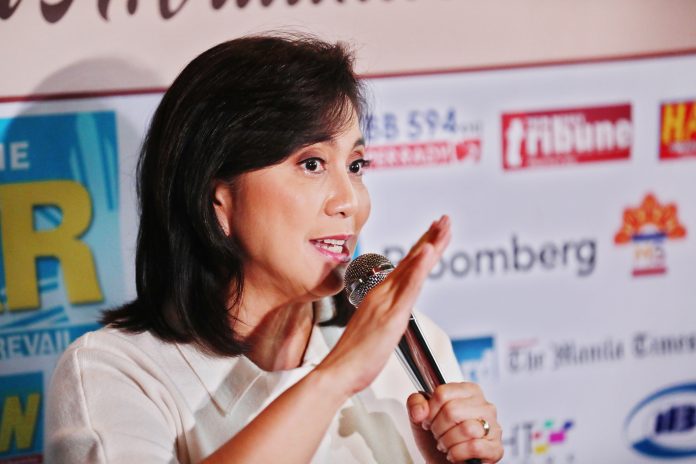 WAS I given the wrong figures?

Vice President Leni Robredo raised this yesterday as she hit back at allies of the administration for questioning the basis of her assessment that the government’s bloody war on drugs was a complete failure.

Pointing out that data cited in her 40-page report was provided by the PNP, Robredo said: “Kapag sinabi nilang mali iyong data ko, galing iyon sa kanila (If they’re saying that my figures are wrong, it all came from them).”

The Vice President said that if the Philippine Drug Enforcement Agency (PDEA) headed by Dir. Gen. Aaron Aquino is disputing the data in her report, it should confront the PNP instead and reconcile their differing figures.

“Pero huwag ako iyong sabihan nila. Ang sabihan nila iyong PNP, kasi hindi namin imbento iyong data. Iyong data, galing sa kanila. So baka mas mabuti, mag-usap-usap muna sila (They should stop hitting at me. They should talk to the PNP because we did not make the figures up. The data came from them so it would be better for them to talk first),” she said.

Robredo, who worked briefly as vice chair of the Inter-Agency Committee on Anti-Illegal Drugs (ICAD) in November, pointed out that both PDEA and the PNP are part of the inter-agency committee’s enforcement cluster.

“So kapag may binigay na data iyong PNP, dapat tanggapin iyon ng PDEA. Kung palagay ng PDEA mali iyong data ng PNP, kailangan niya i-correct (So of the PNP presents a data, the PDEA should accept it. If PDEA thinks the data is wrong, it has to move to have it corrected,” she said.

In her report released on Monday, Robredo cited official government records which she claimed showed that drug supply and dirty money were only reduced by one percent despite law enforcement efforts to stop the illegal drugs trade.

She likewise cited data that the PDEA was only able to seize 1,344.87 kilograms in 2019 even if the PNP estimates that 3,000 kilograms of shabu worth P25 billion are consumed every week or P1.3 trillion annually.

The Vice President also cited the Anti Money Launder Council’s (AMLC) report during the first Rehabinasyon National Anti-Drugs Summit held in Davao City in February 2019 that it has “frozen a total of Php 1.4 billion in illegal drug-related assets from 2017-2018.”

She said that while this is almost four times higher than the assets frozen during the 2013-2016 period, “it is not even one percent of total estimated consumption, and that is just for shabu.”

President Duterte had slammed Robredo as a “colossal blunder” following her report and charged that the Vice President had done nothing in the past three years.

Robredo declined to comment on what she called the President’s penchant to insult her because “I only answer when there are facts or if there is fake news.”

Speaker Alan Peter Cayetano said Robredo’s assessment of the government’s anti-narcotics war was “unfair” even if he believes that the Vice President “means well” in releasing her report.

Cayetano said the Vice President failed to mention that the previous administration had a far worse record than the Duterte administration in fighting drugs.

“I think the assessment is very unfair because while the facts are there, her conclusion does not support the facts,” he told reporters in Taguig City. “For example, she did not even compare the number of those apprehended for drugs now to those caught under the past administration.”

“So if she says that the drug war is ‘palpak’ (a failure), what will you call the previous administration? Ultra ‘palpak’ or ‘papalpakpakpakan,’” he said.

Senate President Vicente Sotto III said the President’s high approval ratings the past three years was partly due to the successful implementation of the drug war, which he said has led to much safer communities.

“The President’s high approval ratings after 3 years are incompatible with a grand failure accusation… The truth is found in the stories of families at home and the changes in their neighborhood. Dati takot ang mga tao sa adik, ngayon ang adik ang takot. (Before, people were afraid of drug addicts, but now it is the other way around),” Sotto said.

He added that the success or failure in the fight against illegal drugs cannot be measured by mere statistics, as what Robredo did.

“The drug problem is not explained by numbers alone. It is deeper than mere arithmetic.

I’ve been in this war for 31 years and I know how complex the problem is,” he added.

Robredo chided administration allies who called her report “unfair,” saying it was obvious that they have not read it in full.

Robredo said her only goal in making the report was to “protect the institutions, recognize the achievements (of the drug war) and penalize those who destroy our institutions.”

Robredo had called the war on drugs a failure for putting too much focus on the street-level enforcement aspect, “or going after small drug pushers.” – With Raymond Africa