Robredo arrived ahead of President Duterte who also held a Cabinet meeting in Tuguegarao City in the province.

Robredo, who is expected to be the Liberal Party’s standard-bearer in the 2022 presidential elections, said she was not competing with the President in bringing relief to the province which is now under a state of calamity. 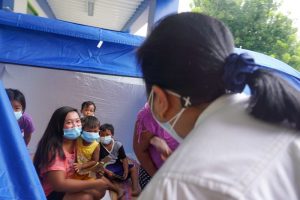 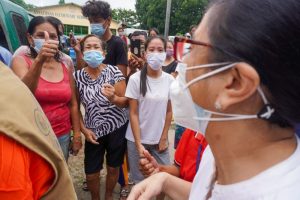 The Vice President said it is important for her and other public officials led by the President to visit the province to show the typhoon victims that they are there to commiserate and bring help.

Robredo said she saw the President arrive at the airport after and lauded the Chief Executive’s effort to visit the province to show the people that they are not being neglected. “Parang pagpaparamdam lang sa mga kababayan natin dito na nakikiisa tayo sa pagdadalamhati nila sa pinagdaanan kasi mahirap talaga. Mahirap iyong pinagdaanan, nakakatakot, siyempre nalagay sa—parang nakataya iyong buhay nila (It’s to show our people that we’re with them in their sorrow because what they’re going through is really difficult. Their situation is difficult, scary and of course, their lives were in peril),” she said.
In an earlier Twitter post, Robredo said some areas were still flooded although water has started to recede.

In another video posted on her Facebook page, Robredo said she was at the boundary of Linao Norte and Annafunan in Tuguegarao City, noting that most of the calls for rescue were from residents of Linao East.

The Vice President, however, said may of those who called her office no longer needed to be rescued and were just asking for food and water as some of them have started cleaning up their houses.

Last Thursday, Robredo visited evacuees at the Kasiglahan Village Elementary School in Rodriguez, Rizal, where low-lying areas were flooded because of the Ulysses which mostly affected Central Luzon, Metro Manila, and Southern Luzon.

The Office of the Vice President has been coordinating with other government agencies to help those who need to be rescued as flood waters inundated many areas, including Marikina City.

Last Saturday, Robredo personally coordinated with the Armed Forces and was assured that Marine rescue teams and police teams were on the way to rescue Cagayan residents.

While waiting for augmentation to reach Tuguegarao, the Vice President’s team got in touch with the PNP and forwarded all the compiled requests and calls for help.