Sen. Panfilo “Ping” Lacson on Wednesday night questioned the padded infrastructure allocation for more than 200 congressional districts in the proposed P4.5-trillion General Appropriations Bill (GAB) for 2021 that was approved by the House of Representatives before Congress went on Halloween break last month.

Lacson said a scrutiny of the GAB showed excessive additions to the proposed budgets of majority of the country’s congressional districts as contained in the Malacañang-proposed 2021 National Expenditure Program (NEP). 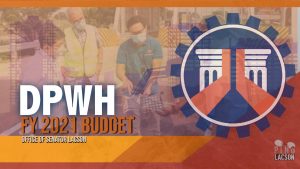 Lacson refused to name names “because I want to focus on the issue at hand instead of the personalities involved” even as he reiterated a previous statement that the biggest additional allocation was for a congressional district in Davao, which got a P15.351-billion budget in the GAB, which is P5.677 billion higher than the NEP-proposed P9/67-billion.

Another district had an infra allocation of P2.9 billion under the NEP but got a P5.016 billion in the GAB, and still another district was given an extra P3.963 billion by congressmen to top its P3.59 billion NEP appropriation.

“Several districts got more than P1 billion, while the remaining districts got at least P620 million. The allocations per district amount to a total of P474,804,707,000. Remember when we questioned the P396 billion in lump sum appropriations, they came out with an addendum. But the addendum exceeded (the) P396 billion, it reached P474 billion,” Lacson said during the plenary deliberations on the DPWH proposed budget for next year.

He said his office compared the House’s GAB against Malacañang’s NEP, which included a listing of 739 line-items for the construction of multi-purpose buildings as an addendum to the DPWH budget.

“Mr. President, distinguished colleagues, all I can say is pity ourselves.  Those of us who may have individual insertions would look like barangay kagawads (councilors) compared to our (House) counterparts,” Lacson said.

Lacson said the projects had a total appropriation of P1.709 billion under page 200 of the voluminous GAB, but a thorough check of the budget measure would show a P4.449 billion entry in page 1041 also for the same projects.

“It appears that it’s only one project. If we add… the total amount of duplicated projects would be P6.169 billion,” Lacson said.

Sen. Juan Edgardo Angara, finance committee chair, said that the DPWH explained that the P4.449 billion was tagged by the Department of Budget and Management as FLR or for later release “so they had to re-appropriate it for 2021.” “The P1.7 billion is a new appropriation and is not contained in the 2020 GAA (General Appropriations Act),” Angara said.

He said there were also overlapping appropriations for various DPWH road projects, among them a stretch of the Surigao del Sur boundary-Davao Oriental coastal road and the Paco-Roxas-Arakan Valley junction Davao-Bukidnon road.

PS5, Airpods up for grabs