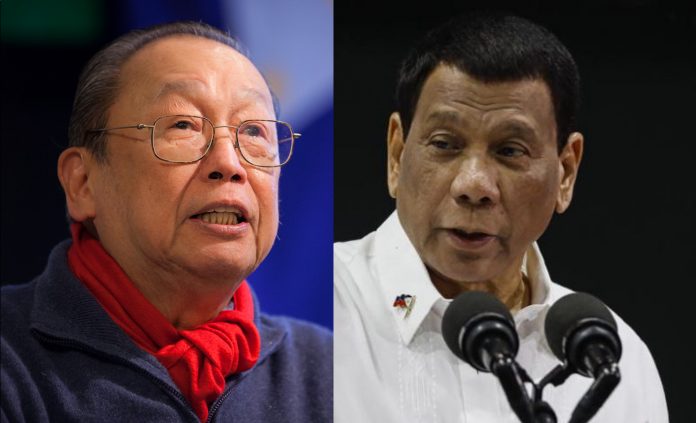 COMMUNIST party founding chairman Jose Maria “Joma” Sison told President Duterte to make a formal offer if he really wants a ceasefire with the communist movement while government forces are busy implementing a Luzon-wide enhanced community quarantine to prevent the spread of the coronavirus disease (COVID-19).

Sison, the chief political consultant of the National Democratic Front of the Philippines, said the NDFP has received reports that the deployment of soldiers and policemen is not meant to help fight COVID-19 “but to suppress the people’s democratic movement in the urban areas.”

Sison, who has been in self-exile in The Netherlands since the late 80s, noted Duterte has ordered the military to finish off the communist movement before 2022 when Duterte’s six-year term ends.

“But if he is really serious with his offer to have a ceasefire with the NDFP, he must make a formal offer through the GRP (Government of the Republic of the Philippines) negotiating panel to the NDFP negotiating panel,” said Sison.

“The offer will be seriously studied by the NDFP and the Communist Party of the Philippines. It will be related not only to the common fight against COVID-19 but also to the resumption of the peace negotiations,” said Sison.

In March last year, Duterte said he was permanently terminating the peace talks with the communists. Nine months later, Duterte sent Labor Secretary Silvestre Bello III to the Netherlands to discuss with communist leaders the possibility of resuming the talks.

On Monday night, Duterte asked the communists to go on a ceasefire with government amid the efforts to prevent the spread of the virus.

“Kindly give me that … If you really want that, we will be at all times on talking terms. In this time of crisis, kindly cooperate and help. It’s better that you help. I will repay you with a good heart in the coming days,” he said.

Withholding permits not the solution