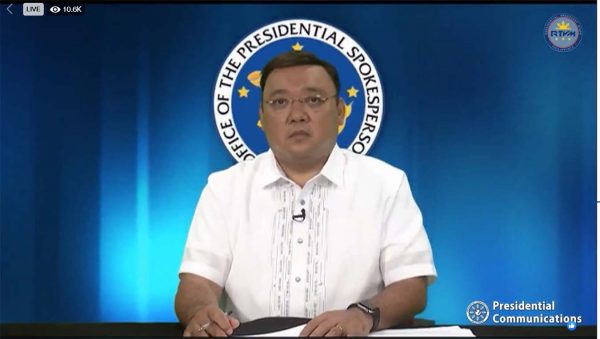 Roque, however, said the creation by Public Works Secretary Mark Villar of a task force to investigate the irregularities in his department is a good beginning and step towards ridding the DPWH of corrupt officials.

“Many people doubt if it (task force) can succeed, because it’s the same people investigating one another. So we would prefer an independent body. But for now, let’s face it, in any organization we need to have mechanism for internal accountability… I don’t see any reason why the DPWH shouldn’t have one, and that is why we are saying, it’s a step towards the right direction,” he said in a TV interview.

Roque said it is “not inconceivable” for President Duterte to form another body to investigate DPWH, similar to what he did with the Philippine Health Insurance Corporation (PhilHealth), especially if he is not satisfied with the findings of the TAG.

President Duterte in August ordered the Department of Justice to create a task force to investigate graft and corruption at the state insurance agency, which has reportedly led to billions in losses in funds. The task force has recommended the filing of cases against several PhilHealth officials, including resigned chief executive officer Ricardo Morales.

The President, who has repeatedly criticized the DPWH for alleged rampant corruption in the agency, has also cleared Villar, saying the secretary need not engage in corruption as he is already rich.

“It’s not inconceivable that another task force of the DPWH may be formed by the President, in the same way that he formed one for the PhilHealth. But it really all depends on how this new task force will operate, if it is credible, if it can hold individuals accountable for their acts. Because the President has vowed to the nation that he will devote his remaining two years term in office in cleansing the ranks of government,” Roque said.

Duterte had also vowed then to devote the remainder of his term, which shall end in 2022, to ridding government of corruption.

‘DC’s Legends of Tomorrow’ and all seasons of ‘Arrow’ premiere...