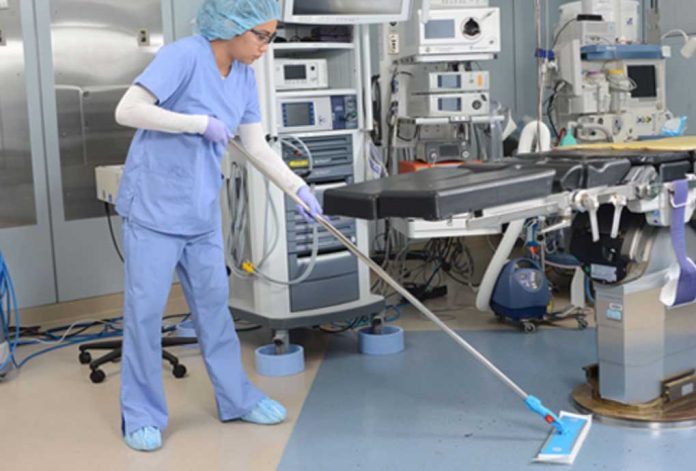 KATINA McDavis spends 40 hours a week cleaning hospital rooms at Northwestern Memorial Hospital in Chicago. Masks are in short supply these days. So, too, is information.

Confusion and fear abound among hospital maintenance workers and housekeepers like McDavis, quietly toiling on the front lines of America’s battle against the novel coronavirus for low pay.

Their jobs are often unheralded, but vital to keeping hospitals running. They are the ones who mop floors and dispose of the trash, who fix bad plumbing and change dirty fan filters.

Unlike nurses and doctors, they lack the medical training to know when and how to protect themselves, and they say guidance from employers has been spotty.

“I’m a diabetic and still coming in every day,” said McDavis, 43, who’s spent more than 20 years on the job. She said she tries to wear a surgical mask when cleaning if necessary but that sometimes they are not available or she is told she does not need one.

Two of her colleagues, she said, have tested positive for COVID-19, the disease caused by the novel coronavirus. The virus has so far infected about 350,000 in the United States.

Hospitals have protocols for keeping housekeepers safe, but often drop the ball on communicating them, said Anne Igoe, vice president of a Chicago-based branch of the Service Employees International Union, which represents hospital workers like McDavis.

“People are being dispatched to a room and told all they need are gloves, and they show up and there is a nurse in full PPE in the room,” she said.

Northwestern Memorial said in a statement it has enough PPE to keep workers safe, and provides “multiple channels for communication including a dedicated hot line so that our staff can ask questions and receive support.”

A non-scientific poll by the Service Employees International Union showed 75% of some 250 respondents – mostly housekeepers and nurse’s assistants in Chicago and Indiana – have been told either they do not need PPE, or must ask a nurse for it.

But maintenance workers and housekeepers say they often get conflicting messages when they ask what precautions are needed.

“The communication is non-existent,” said a mechanic at NYU Langone in New York, whose team is in charge of tasks like morgue refrigeration and changing fan filters.

The mechanic, like many of those interviewed for this story, declined to be named for fear of losing his job.

“I get a different answer some days than others,” he said.

NYU Langone said the hospital has equipped housekeepers “appropriately” with PPE and “provided them with proper instruction as to the level of PPE protection required on each unit and for each individual worker.”

Kimberly Hughes, 54, a housekeeper at a Montana hospital, said she has the chronic inflammatory lung disease COPD, leaving her at higher risk of complications from COVID-19.

One doctor handed her a 60-pound bag of laundry from a COVID-19 patient’s room, and told her to hold it away from her body. Hughes, who stands 5’3” and weighs 135 pounds, said she could not. “It does bother me that it touched me because we don’t have protective gowns for this,” she said, adding that “as housekeepers we really don’t count.”

Fearful of contracting COVID-19, some hospital janitors are refusing to take on certain tasks.

At Brookdale University Hospital Medical Center in Brooklyn, New York, a janitor handed patient Sylvia LeRoy a mop and asked her to clean her own room, according to LeRoy’s sister, Shirley Licin.

And nurses at New York-Presbyterian Hospital are at times taking out trash themselves to preserve PPE, one nurse at the hospital said. “Nurses are going to be the ones going in the rooms and taking it out and giving it to the janitor,” the nurse said.

At another Manhattan hospital, a nurse told Reuters housekeepers were “routinely refusing to empty trash cans,” which “are overflowing.”

To cope with the increased patient loads and demands, a number of hospitals are seeking to hire more housekeepers. Retaining those they hire is another matter.

Most of the people his firm has hired are African Americans or Hispanics who have lost their jobs cleaning hotels and offices, Medrano said.

Still, he said, around 20 people quit within the first couple of days on the job, mostly over concerns over PPE.”The lack of N95 masks, that’s something that really scares people,” he said.

The NYU Langone mechanic said he is so worried about getting infected that he is living apart from his wife and three-year-old son until the pandemic ends.

His son recently woke up to a nightmare that his mother was taken away in an ambulance.”I worry about how I would take care of my son if I got sick,” the boy’s mother said. “I worry about how I will explain to him that his daddy probably won’t be able to come for his birthday.”