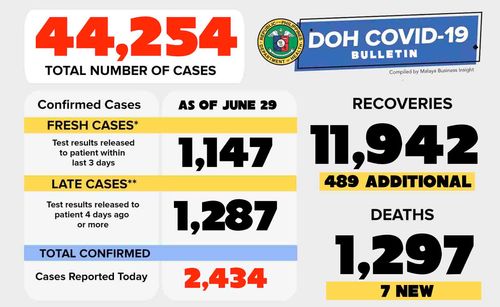 NEARLY 2,500 new cases of the coronavirus disease (COVID-19) was reported by the Department of Health Sunday, the highest single-day spike in the country, just two days after a combined 3,025 new cases were reported.

Counting the 1,531 cases reported last Friday and 1,494 last Saturday, the total number of COVID cases in the country rose to 44,254, while 489 more patients recovered, the new record of recoveries in a day, surpassing the 400 set last Friday. In all, 11,942 patients have survived the deadly virus.

“As the country continues to ease community quarantine measures, the rise in the number of cases today may be attributed to the increased contact among the population,” said the DOH.

The DOH also reported that 7 more patients died, bringing to 1,297 the total number of deaths in the Philippines.

DOH Undersecretary Maria Rosario Vergeire on Sunday said they will no longer use the combination HIV drug – lopinavir with ritonavir – to treat patients.

“Based on the recent evidence and recommendations from our experts, we will be stopping the use of lopinavir with ritonavir among hospitalized patients,” said Vergeire.

The WHO on Saturday announced it is discontinuing its trials of the lopinavir with ritonavir among hospitalized patients with COVID-19 after they failed to reduce mortality.

Meanwhile, the Food and Drug Administration (FDA) called on the public to have more patience while waiting for vaccines and drugs against the deadly virus.

In a televised press briefing last week, FDA Director General Eric Domingo said the public should not believe all claims posted on social media claiming cure for the dreaded virus.

“Vaccines and drugs really undergo a tedious process. It has to go through a series of assessments and be backed by scientific evidence,” said Domingo.

“We should, therefore, not be impatient and act desperately by believing everything we see and hear, buying them, and injecting or taking them,” he added.

“Let us be careful and critical of the medicines we will be using. It is not a joke using just any medicine because of possible adverse reactions,” Domingo said, warning the public against vaccines and drugs being sold online supposedly capable of curing COVID-19.

He also appealed to the public to report the deliberate selling of unregistered drugs to the FDA.

“Unfortunately, even during the time of the pandemic, there are people taking advantage of the situation and are selling unregistered or unapproved products,” Domingo said.

He said there are 137 candidate vaccines against COVID-19 under development worldwide, 17 of them already in the clinical trial stage or those being tested on humans.

“It is really our wish that by the end of the year or by early next year, we can already have a vaccine for COVID-19,” he said.

He added the Department of Science and Technology (DOST) is pushing for the participation of the Philippines in the planned World Health Organization (WHO) Solidarity Trial for Vaccines.

“We want to join that clinical trial so that we can have easier access to the vaccines once they are developed,” said Domingo.

Domingo believes that remdesevir is showing the most promise among the drugs being tested, noting that initial results of trials using the medicine originally developed for the Ebola virus shows patients being able to recover from the previous 15 days to just 11 days.

“Remdesevir appears to have a positive effect. If it is able to reduce the time of illness, it can also possibly prevent death,” said Domingo.

He, however, stressed that remdesevir is not available to those not participating in the trials, unless they are able to secure a compassionate special permit from the FDA.

Hydroxychloroquine, however, has been taken out by the WHO due to evidence that it does not minimize COVID-19’s mortality rate.

The Philippines currently has 450 patients enrolled in 22 participating hospitals under the program.

Gerard Naval - January 18, 2021
AT the start of 2021, the Commission on Elections (Comelec) has finally recorded over one million applications for voter registration for the May 2022...