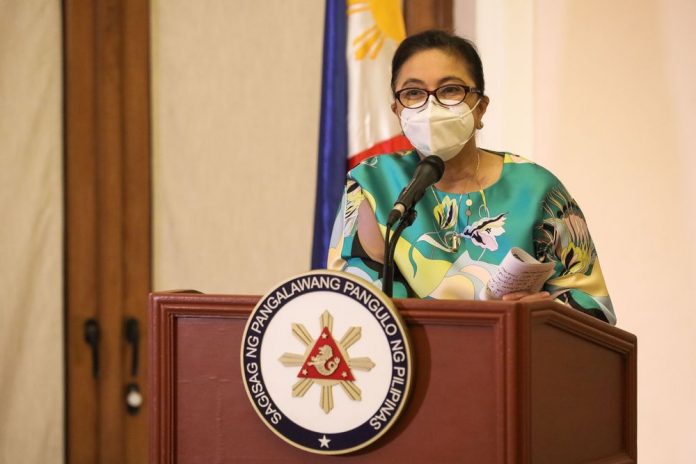 VICE President Leni Robredo yesterday said the government’s target of finishing its COVID-19 vaccination program by 2023 is a “cause for concern” because the Duterte administration should be striving to achieve herd immunity sooner.

She said it is a cause for concern because many Filipinos are suffering and many have lost jobs because of the pandemic.

Robredo said the faster Filipinos are vaccinated against COVID-19, the better for the country as things can go back to normal and the economy will start recovering.

Data from the Philippine Statistics Authority (PSA) showed that the Philippine economy contracted by 9.5 percent overall in 2020, the worst performance in the nation’s post-war history. The figure is even worse than the predicted contraction of 4.5 to 6.6 percent, which became the basis of the Development Budget Coordination Committee or DBCC for the 2021 National Expenditure Program.

“Dapat ‘yung goal natin better than 2023. Nakakapag-alala ‘yon kasi as of now, ang daming naghihirap na mga Pilipino, ang dami nang nawalan ng trabaho, so dapat ‘yong goal natin the faster na mabakunahan ang mas maraming tao (Our goal should be better than 2023. That’s a cause for concern because many Filipinos are suffering, many have lost their jobs so our goal should be to vaccinate our population faster),” Robredo said in a Question and Answer style video posted on her Facebook page.

Health Undersecretary Maria Rosario Vergeire on Monday said government is aiming to achieve herd immunity against COVID-19 by 2023 although it is possible for the target to be achieved earlier.

Robredo explained that herd immunity happens when a virus can no longer be transmitted easily because many people are already immune to it after mass vaccination.

Once this happens, she said, people can see start seeing each other again in gatherings, visit friends and relatives, eat in restaurants with no worries, and go to work and attend physical classes in schools.

Robredo said this is why she has been urging the government to expedite its vaccine rollout and boost the people’s confidence in it by launching a massive information campaign.

Vaccine czar Carlito Galvez Jr. has said the government intends to vaccinate 75 to 80 percent of the population to achieve herd immunity.

The country plans to buy 148 million vaccine doses to inoculate up to 70 million people this year beginning next month starting with healthcare workers and medical professionals. In total, the government intends to procure 178 million doses which is good for 92 million people, to factor in the possible delays in deliveries.

Singapore is the first Southeast Asian country to have officially started a COVID-19 vaccination program when it began inoculating healthcare workers with the Pfizer vaccine on December 30 and has been giving more than 175,000 people their first shot since then.

Myanmar began its own vaccination program on February 5, less than a week after the military coup which led to the arrest of its elected leader Aung San Suu Kyi and other administration figures.

Other Asian counties have started vaccinating their population.

Cabinet Secretary Karlo Nograles, concurrent co-chairman of the Inter-agency Task Force for the Management of Emerging Infectious Diseases, dismissed the idea of declaring a special holiday in Metro Manila to ensure the speedy and unhampered delivery and storage of COVID-19 vaccines.

Nograles said traffic rerouting schemes should just be implemented instead of a holiday, which could affect the work and livelihood of many people, particularly those who work under a “no work, no pay” arrangement.

The first batch of COVID-19 vaccines – 117,000 doses from Pfizer-BioNTech under the COVAX facility, is expected to be delivered this month.

The government on Tuesday conducted a simulation exercise from the arrival of the vaccines from the Ninoy Aquino International Airport in Pasay City to its unloading and undergoing customs clearance to the delivery to the Research Institute for Tropical Medicine (RITM) in Muntinlupa City.

Usana said the PNP Highway Patrol Group and local police units will be mobilized to secure the vaccines.

The bill provides exemptions to compliance by LGUs with the procurement requirements under Republic Act 9184 or the Government Procurement Reform Act in the purchase of COVID-19 vaccines and other much-needed supplies during the pandemic.

Velasco said this mechanism would ensure that COVID-19 vaccines are “procured and administered in an expeditious, effective, efficient and equitable manner.”

Under HB 8648, the requirement of Phase IV trials for COVID-19 medication and vaccine stipulated in the Universal Health Care Law is waived to expedite the procurement of said medication and vaccine, provided that these are recommended and approved by the World Health Organization and other internationally recognized health agencies. – With Jocelyn Montemayor and Victor Reyes

Copper soars to highest in 10 years