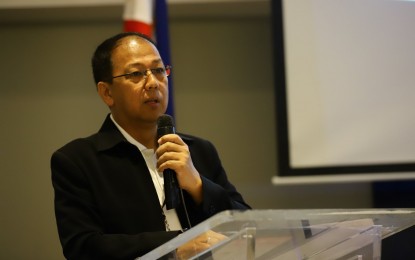 GOVERNMENT yesterday acknowledged the need to intensify its information campaign on the COVID-19 pandemic, particularly on the vaccination drive which is set to start this month, amid false information and the refusal of majority of Filipinos to be inoculated.

Vaccine czar Carlito Galvez Jr., also National Task Force against COVID-19 (NTF) chief implementer, said vaccination aims not only to save the lives of Filipinos but also the economy and bring back normalcy in the country.

At least 117,000 COVID-19 vaccine doses from the US firm Pfizer BioNTech, under the COVAX facility, are expected to arrive this month.

Martin Andanar, head of the Presidential Communications Operations Office, said false info about vaccines adds to the misunderstanding and contributes to the apprehension of Filipinos to get vaccinated.

“The challenge of the lack of understanding in this regard remains a widespread problem.

This gets further complicated with misinformation and disinformation by some individuals and groups who claim that vaccination is not an ideal and safe option for virus immunization,” he said.

The survey showed 84 percent of those who refuse to be vaccinated said they are not sure if the vaccine is safe while 7 percent said it might not be free and 4 percent said the vaccine could be costly or expensive. Five percent felt that a vaccine is not needed to combat COVID-19.

Another survey said only 25 percent of respondents in are willing to get a vaccine while 28 percent said they would not. The survey was conducted by the OCTA Research Group from December 9 to 13.

Results of the two surveys were released last month.

The chief of the Philippine Information Agency, Ramon Cualoping, said government’s “Explain, Explain, Explain” caravan went to Cebu, Siquijor and Negros Oriental in Central Visayas last week and will be in Davao, Davao Oriental and Davao del Norte this weekend and in the Caraga region next week to talk with local government officials and other stakeholders about the vaccination program.

During the “Laging Handa” public briefing, Andanar said the caravan aims to explain up to the grassroots level the importance of vaccination, and to correct wrong information about the vaccines, like the government is favoring a particular brand or country despite concerns about the effectivity or risks involved in using the vaccine.

He said there were also some concerns that the vaccines that would be used are unregistered and did not pass the standards of the Food and Drug Administration.

Andanar, in a statement, said he understands the observation of Senate President Vicente Sotto III on the need for a better COVID-19 information campaign because of the “apparent apprehension among Filipinos to get vaccinated.”

He said this is the reason the PCOO has been intensifying its communications campaign, to further educate and enlighten Filipinos on the government’s vaccination program.

After the four facilities, health workers of other COVID-19 referral hospitals in other parts of Metro Manila, Cebu City and Davao City would be vaccinated.

Galvez said another proposal is to roll out 5,000 to 10,000 doses of vaccines per local government unit at least in Metro Manila before the end of the month to cover the other health workers in their areas.

At least 117,000 COVID-19 vaccines from Pfizer BioNTech, under the COVAX facility, are expected to arrive this month.

Galvez said the government is set to send a letter before February 14 to the COVAX Facility to request for 900,000 more doses of Pfizer vaccines.

He previously said the commitment under the COVAX facility has been reduced because of limited supply.

The COVAX Facility is a global alliance that aims to provide poor countries opportunities to vaccinate their population against the deadly coronavirus.

The Philippines is among 18 that will receive vaccines from the COVAX.

Aside from Pfizer, the Philippines will also receive some 5.5 million to 9 million doses of vaccines from AstraZeneca, under COVAX, by the first quarter of this year.