Catanduanes Gov. Joseph Cua and Albay Gov. Al Francis Bichara on Tuesday appealed for food and other relief items for their constituents and construction supplies to reconstruct their provinces, saying their funds are almost depleted because of the COVID-19 pandemic.

This developed as two areas in northern Luzon were placed under signal No. 1 yesterday, two days before the expected landfall of “Siony” which has intensified into a severe tropical storm from a storm.

Siony is forecast to further intensify into a typhoon before it makes landfall in the area of Batanes and Babuyan Islands on Friday.

Siony comes after Rolly devastated the Bicol region and left at least 25 people dead and hundreds of thousands displaced. Rolly exited the Philippine area of responsibility on Tuesday night.

The Philippine Atmospheric, Geophysical and Astronomical Services Administration said as of of 4 p.m. yesterday, Siony was some 735 km east of Basco, Batanes with maximum sustained winds of 95 kph near the center and gustiness of up to 115 kph. It was moving slowly northward.

“Siony is forecast to move slowly or remain almost stationary in the next 6 to 12 hours (from 5 p.m. yesterday),” PAGASA said.

After that, Siony will move generally westward or west-northwestward towards the Luzon Strait and extreme northern Luzon.

“This will bring the center of Siony over or very close to the Batanes and Babuyan Islands between tomorrow (Thursday) evening and Friday morning. As such, a landfall scenario over these localities remains likely,” said PAGASA.

Siony is expected to leave the Philippine area of responsibility of Friday afternoon, said PAGASA.

“What’s worrying us is that Cagayan was flooded two weeks ago due to the effects of (typhoon) `Quinta.’ That means there is a saturation of soil in Cordillera and our problem there is landslide,” added Jalad.

Jalad said he was due to meet with local officials in Cagayan Valley, Ilocos region and Cordillera Administrative Region later yesterday to discuss final preparations for Siony.

Jalad said they may resort to preemptive evacuation of people from danger areas “but not as early as now.”

The military›s Northern Luzon Command said it has ordered its troops to remain on alert as it braces for the impact of Siony. 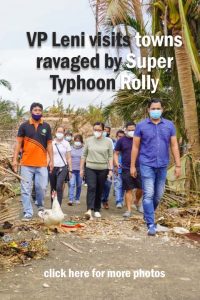 “Although Siony is relatively weaker compared to Rolly, there is still a need for us to ensure that all of our soldiers, sailors, airmen and Marines are ready if and when our service are required anytime and anywhere,» said Nolcom chief Maj. Gen. Arnulfo Marcelo Burgos.

Jalad, who is also administrator of the Office of Civil Defense, said the national government began transporting relief items to Albay and Catanduanes on Tuesday when two planeloads of supplies arrived these areas.

Jalad said the government has not abandoned the two provinces.

“In fact, there is a protocol: first three days, it’s the municipalities or cities (that’s in charge of relief operations), next three days the provinces. We›re supposed to enter on the seventh day but we didn’t wait for that, we acted immediately,” said Jalad.

Jalad acknowledged the governors appealed for help because they are running of out funds. The local governments said their calamity funds are almost depleted due to their response against the COVID-19 pandemic.

Jalad said they are in the process of preparing for the rehabilitation of the provinces.

“Following the relief operation, we›ll give early recovery interventions, like financial assistance. We are discussing that,” he said.

As of Tuesday night, the Office of Civil Defense-Bicol said 102,682 families or 359,690 persons have been displaced by Rolly, mostly in Catanduanes and Albay.

Cascolan said six people remain missing — three in Bicol, two from Mimaropa and one from Calabarzon.

The NDRRMC said the cost of damage to infrastructure at P4.79 billion in the Bicol region alone. Damage to agriculture in Calabarzon, Mimaropa, Bicol, and Eastern Visayas was placed at P1.99 billion.

Meanwhile, Sorsogon Gov. Chiz Escudero said teams have completed the clearing of debris from Rolly. He said electricity is expected to be fully restored in the province on November 10.

Vice President Leni Robredo said the persistence of municipal and barangay officials in Tiwi and Guinobatan towns in Albay saved hundreds of lives when winds from Rolly hammered empty homes to the ground and boulders carried by floodwaters buried entire villages.

She praised local officials for going the extra mile to convince their constituents to move out and seek shelter in safer locations before Rolly made landfall early Sunday.

“With Mayor Jaime Villanueva, we surveyed the coastal community of Barangay Bolo in Tiwi, Albay. After the storm passed, practically no house was left standing,” she said.

In Barangay San Francisco in Guinobatan, rocks and debris carried by rampaging waters flattened 230 houses, leaving only a few roofs sticking out to mark a once bustling community. Three deaths were recorded while four are still missing.

On the third day of relief operations in the Bicol Region, the Vice President expressed her gratitude to private transport companies who stepped up to provide manpower and vehicles to ferry emergency food packs, medicine, and relief supplies to the typhoon victims.

The Department of Labor and Employment said it will give emergency employment to some 30,000 displaced workers in Bicol.

“There will be 5,000 beneficiaries per province in the whole of Region 5,” said Labor Secretary Silvestre Bello III.

He said about P180 million to P200 million will be needed to finance the emergency employment program, funding of which will come from «Bayanihan to Recover As One Act».