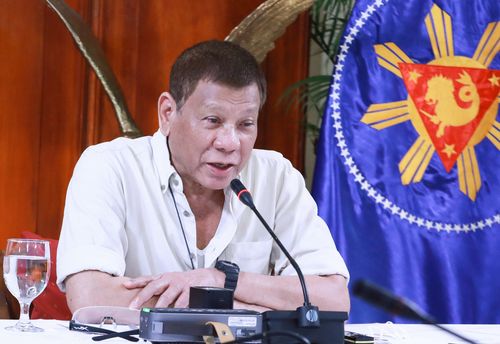 PRESIDENT Duterte yesterday assured residents of Cagayan province that rescue operations would continue until all families affected by typhoon “Ulysses” have been saved and assisted.

“My solidarity and condolences go out to my fellow Filipinos in Cagayan Valley, most especially to the bereaved families of the victims of the unprecedented flooding that occurred in the area in the aftermath of typhoon Ulysses,” the President said during a visit to Tuguegarao City in Cagayan province.

He said he went there to show the people that the government is attending to their needs and would continue its “rescue operations until all families are saved, all casualties and missing persons have been accounted for, and all affected individuals and communities have received their needed relief and other assistance.”

The President yesterday flew to Cagayan in the Cagayan Valley region and later to Camarines Sur in the Bicol region which was also hit by Ulysses last week.

He asked local government units in the region to collaborate with the recently created task force for the quick rehabilitation of devastated communities.

Duterte, during a briefing attended by members of the National Disaster Risk Reduction and Management Council (NDRRMC), ordered the Department of Energy to ensure that power is immediately restored. He also ordered the immediate provision of potable water in the region.

He directed the Department of Public Works and Highways to oversee rehabilitation efforts.

Public Works Secretary Mark Villar said his department has a quick response fund (QRF) that could be tapped and the Department of Budget and Management had promised to augment the QRF.

The President also directed the Department of Environment and Natural Resources to determine whether illegal logging and mining operations contributed to the massive flooding in Cagayan. He also supported tree-planting projects of the different departments.

Duterte told the DOE to go ahead with its plan to ask the Climate Change Commission for compensation for damage incurred during typhoons, which he blamed on climate change.

Energy Secretary Alfonso Cusi said the DOE is asking for compensation for damage to hydroelectric power plants, but said the request will be a “test” if the country could get climate justice.

Duterte, in an ambush interview in Camarines Sur, said he also talked about climate change when he spoke before the Association of Southeast Asian Summit this week.

The conducted an aerial inspection of Minalabac and Bula towns in Camarines Sur before attending a briefing in the provincial capitol about the damage due from Ulysses and super typhoon “Rolly.”