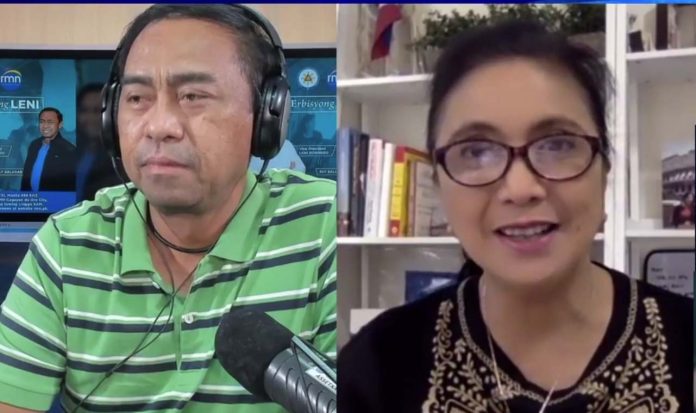 VICE President Leni Robredo yesterday urged the Executive to follow the example set by Baguio City Mayor Benjamin Magalong, who resigned as COVID-19 contact tracing czar after attending a party in Baguio City where rules on social distancing and mask-wearing were violated.

Robredo lauded Magalong for his “really admirable response” and “strong sense of accountability” which the Vice President said should be emulated by the Duterte administration.

“This should be emulated whenever a mistake is committed or when thing don’t get done.

To me, Ka Ely, what Mayor Magalong did accords respect to his office. My respect for him has not diminished. While it’s true that there was a lapse (on his part), but that Ka Ely, his response was admirable,” Robredo told radio anchor Ely Saludar in Filipino on her weekly radio program aired over RMN.

Like Magalong, Robredo said administration officials should learn to admit shortcomings and start working to improve their performance instead of wasting time defending it.
She particularly noted how the country did poorly in a recent pandemic response index released by an independent international body where the Philippines ranked 79th place out of 98 countries.

The study by Australian think-tank group Lowy Institute’s COVID Performance Index posted last Thursday showed that the Philippines had an average score of 30.6, just behind Spain which had a score of 31.2, and Italy, which ranked 59th with a score of 40.4, two of the worst-hit European countries.

“I already sound like a broken record in saying that this kind of assessment should be taken seriously. Instead of defending (the government’s failures), it should be recognized and accepted and resolved,” she said in the vernacular. “It’s hard when you become defensive because it means you’re contented with what you’re doing and when you are, you won’t improve. That’s what’s wrong with us.”

The Vice President said the administration can no longer resort to its usual alibi by saying that the study is just meant to attack the Duterte administration.

“They might say again that the opposition is just vilifying the administration. It wasn’t the opposition that did the ranking, it was an independent, international body. It’s really not good. Our performance wasn’t good,” Robredo said.

The Vice President said she was saddened to see Magalong go since he has been doing a good job, citing his recent efforts in improving contact tracing in Bontoc.

“Obviously there was a lapse, but I admire Mayor Magalong for his strong sense of accountability. If a lapse was committed, the response of public officials should be like this,” Robredo said.

The Philippines is expecting close to 10 million doses of COVID-19 vaccines from pharmaceutical firms Pfizer and AstraZeneca through the COVAX facility to be delivered by batches from the first quarter to the second quarter of the year, vaccine czar Carlito Galvez Jr. said yesterday.

In a statement released through the Department of Health (DOH), Galvez said the first batch of vaccines will be delivered by mid-February but the final number of doses will still depend on the availability of supply.

Galvez reiterated that healthcare workers, medical-related personnel, and other frontliners will be prioritized once the vaccines to be acquired under the COVAX, which was established to ensure all nations have equitable access to vaccines developed worldwide, arrive.

Galvez said that based on a letter by Aurélia Nguyen, managing director of the World Health Organization-led COVAX facility, the Philippines will receive 117,000 doses of Pfizer-BioNTech vaccines starting mid-February.

The schedule for the deliveries of the other vaccines has yet to be determined.

He said AstraZeneca has committed to deliver between 5,500,800 to 9,290,400 doses for the first two quarters of 2021 but it is uncertain as to how many would actually be delivered in the first quarter.

He said the letter only indicated that “the initial delivery is scheduled by mid to late February.”

“As the company (AstraZeneca) awaits the issuance of its EUL (Emergency Use Listing Procedure), the indicative number of doses reflect only the supply for the first two quarters of 2021,” Galvez said.

Last week Galvez said AstraZeneca and Pfizer are expected to deliver the first batch of vaccines, which he said will be between 200,000 to 500,00 doses each, starting February.

He likewise said Sinovac will deliver 500,000 doses in February.

The Philippine government, through the Food and Drug Administration (FDA), has already granted both Pfizer-BioNTech and AstraZeneca Emergency Use Authorizations (EUA), which means that these vaccines can be safely administered once they become available.

Preparations, including dry runs or simulations, are now being done in Metro Manila to test the preparedness of local government units that would be involved in the distribution and administration of vaccines, and the facilities like cold storage chain where the vaccines would be stored.

Galvez said they would visit and inspect the different parts of the country in the coming weeks to check the vaccination sites, the cold storage equipment and facilities, and personnel to ensure the country’s preparedness.

The government targets to purchase 148 million doses of safe, effective, and cost-effective vaccines to inoculate 70 million people in 2021.

“Churches can really be alternative sites to areas that lack facility, especially those in hard-to-reach municipalities,” said Duque, adding: “The move of the CBCP to transform church facilities to vaccination sites will surely expedite delivery of most-needed healthcare services.”

Earlier, the Catholic Bishops Conference of the Philippines (CBCP) said they have agreed to allow churches to be used as immunization sites for the COVID-19 vaccine rollout.

In addition, the bishops expressed willingness to get inoculated in public if it is deemed to be helpful in reducing vaccine hesitancy.

The city government of Makati said workers of private companies in Makati will be included in the city’s free COVID-19 vaccination program even if they are not registered residents.

Makati Mayor Abby Binay said that for the workers to qualify, companies must have a 2021 business permit and are up-to-date with their tax payments, including those paying in installments.

However, she said companies that have purchased vaccines for their employees will no longer be included.

She assured the public that the city government will provide free hospitalization to anyone who will experience adverse effects after receiving the vaccine.

She said that for non-residents, they will be covered by PhilHealth and the DOH’s Malasakit financial assistance.

The mayor said that expanding the scope of the city’s vaccination program to the business sector will help boost its efforts to sustain the city’s economy through 100 percent COVID vaccination.

“The city’s P1-billion budget for the purchase of the vaccines and its share of vaccines procured by the national government will be enough to cover all Makati-based businesses, from micro, small and medium enterprises (MSMEs) to large companies”, she added.

The country’s flag carrier Philippine Airlines (PAL) yesterday said it will implement revised arrival and quarantine protocols on arriving passengers in compliance with the latest guidelines set by the Inter-Agency Task Force for the Management of Emerging and Infectious Diseases (IATF-EID).

Starting today, the IATF has required all arriving passengers to immediately undergo facility-based quarantine. RT-PCR testing on them will be done on their 6th day of quarantine.

Only Filipino citizens, foreign nationals with long-term visas, diplomats and dignitaries, and those with medical emergency cases, including medical escorts are allowed to travel to the Philippines.

For Overseas Filipino Workers (OFW), PAL said they should register via the Electronic Case Investigation Form (e-CIF) at least three days before their flight to Manila while non-OFWs are required to pre-book a hotel accredited by the DOH and the Department of Tourism for six nights of accommodation.

Non-OFWs, on the other hand, shall present their QR code, passport, and payment receipt and shall undergo RT-PCR testing to be given by the Detoxicare Medical and Diagnostics Laboratory.

Passengers who will test negative will get a Bureau of Quarantine (BOQ) medical certificate but they will still be required to complete the 14-day quarantine/self-isolation under the monitoring of their local government unit or their Barangay Health Emergency Response Team. – With Jocelyn Montemayor, Noel Talacay and Myla Iglesias