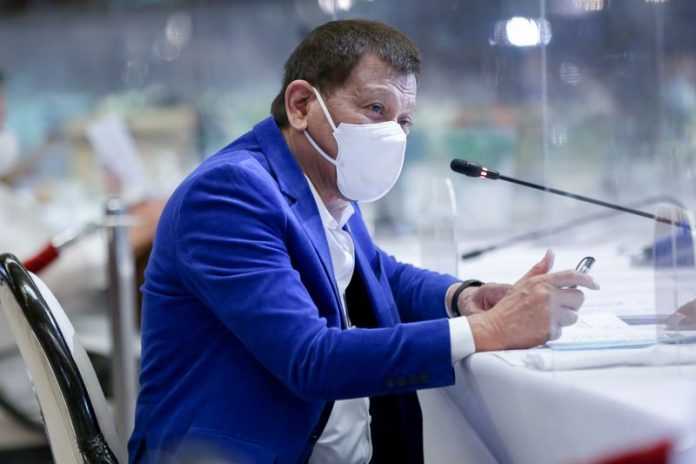 PRESIDENT Duterte yesterday placed Luzon under a state of calamity and tapped Public Works Secretary Mark Villar and Environment Secretary Roy Cimatu to head a task force that will oversee rebuilding and rehabilitation efforts in areas damaged by the series of typhoons that hit the country in the past weeks.

At least five consecutive weather disturbances entered the country from late October — “Quinta,” “Rolly” which was a super typhoon, “Siony,” “Tonyo,” and the latest, “Ulysses,” which caused massive flooding in several areas in Luzon.

The devastation caused by Ulysses, particularly in Cagayan and Isabela provinces, prompted disaster officials to ask the President to place the entire Luzon under a state of calamity.

Duterte also signed Executive Order No. 120, which requires the “Build Back Better Task Force” jointly headed by Villar and Cimatu to submit to him “a quarterly report on the implementation of this order, and publish an annual report on its accomplishments, including projects and programs implemented.”

Presidential spokesman Harry Roque, in an interview with CNN Philippines, said Villar and Cimatu were chosen to head the task force because the Department of Public Works and Highways (DPWH) oversees construction of infrastructure while the Department of Environment and Natural Resources (DENR) is involved in the protection of the environment which is being heavily affected by climate change.

“When we talk of rehabilitation, you talk basically of roads and bridges and buildings destroyed by a calamity, which is the turf of the DPWH, and you also talk about the scientific reasons why we have typhoons of this nature, which is climate change, and that is the rationale of the DENR co-heading the task force,” he said.

Aside from post-disaster rehabilitation efforts, the government also wants to build more evacuation centers that are strong enough to withstand typhoons and could shelter people during calamities.

Duterte, in a taped message aired Tuesday night, it is high time that government build strong structures that can withstand typhoons. He said disaster-resilient evacuation centers should have small rooms with many comfort rooms.

He expressed concern over the continued use of the public schools and government buildings during disasters, which he said has resulted in the disruption of classes and government functions.

Duterte raised the issue after it was reported that there were not enough evacuation centers to accommodate all evacuees and that some schools, especially those used as evacuation centers, need to be repaired due to damages from typhoons and flooding.

The President expressed hope that Congress would help respond to the situation.

Albay Gov. Al Francis Bichara said the Philippine Red Cross and other agencies have vowed to provide shelter to residents affected by super typhoon Rolly that struck earlier this month.

Bichara said the Red Crescent, the International Organization for Migration and other private organizations and foundations also made commitments to help provide shelter assistance.

Bichara said 150 houses were buried by lahar in the province but said residents who are living near the areas where the lahar from Mayon Volcano flowed should also be relocated to save them from harm’s way.

He said private firms have also offered to help in dredging of rivers.

Bichara said the more help his people get, the earlier they will return to their normal lives.
Bichara said authorities continue to conduct relief operations for his constituents as the province. He said many Albay residents are still housed in evacuation centers but did not give figures.

He said debris from the typhoon had been cleared, thus all roads are now accessible.

However, he said many areas remain without electricity due to toppled electric posts.

The Department of Labor and Employment said some P1.3 billion has been released to typhoon-affected workers in four regions — Cagayan Valley, Mimaropa, Calabarzon, and Bicol.

The Armed Forces is mobilizing reservists for relief operations, and subsequent debris clearing, in Cagayan province.

Maj. Gen. Arnulfo Marcelo Burgos, commander of the AFP’s Northern Luzon Command, said the reservists will augment soldiers who have been providing help for days now.

“They are going to play role in relief operation, repacking and distribution of relief goods, because we have already shifted to relief operations (from search, rescue and retrieval operations),” said Burgos.

The military is now focusing on relief efforts as floodwaters in Cagayan continue to subside.

Officials said some areas in Cagayan are still flooded but they are not as worse as before.

As to the extent of the flooding in Cagayan, Burgos said: “There are still areas that are flooding but its already subsiding.”

In Marikina City, Mayor Marcelino Teodoro said Ulysses left behind a year’s worth of garbage.

He said the city is using 100 mini-dump trucks and 30 12-wheeler and 10-wheeler trucks to clear barangays of trash and debris. He said workers are doing at least 12 hours of cleaning and clearing work.

Marikina is one of the areas hardest hit by Ulysses.