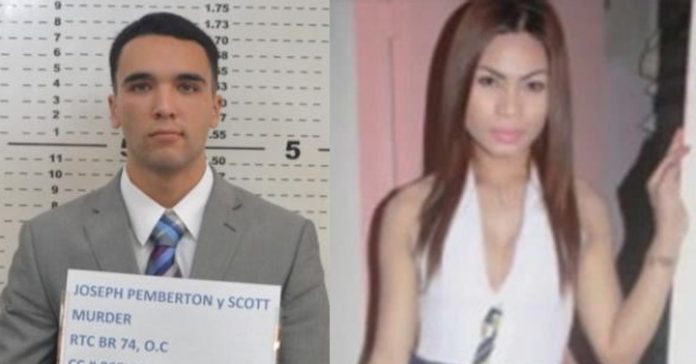 Laude family: This is really devastating

BY JOCELYN MONTEMAYOR and ASHZEL HACHERO

PRESIDENT Duterte yesterday granted American Marine Joseph Scott Pemberton absolute pardon, wiping out the remaining four years of his 10-year sentence for the 2014 killing of transgender Jennifer Laude and giving him the freedom to return to his country.

Duterte’s decision, which came five days after the Olongapo Regional Trial Court ordered the controversial release of Pemberton due to the Good Conduct Time Allowance (GCTA), is expected to whip up a firestorm of protests, especially from the LGBTQ+ community.

Sen. Francis Pangilinan fired the first salvo at Duterte’s decision yesterday, saying: “This questionable and highly controversial pardon helps to redirect and divert the public’s attention away from the incompetent, corrupt and failing COVID campaign.”

Foreign Affairs Secretary Teodoro Locsin Jr. broke the news of Pemberton’s pardon, saying in a tweet: “Cutting matters short over what constitutes time served, and since where he was detained was not in the prisoner’s control – and to do justice – the President has granted absolute pardon to Pemberton. Here at the Palace.”

Justice Secretary Menardo Guevarra said he was consulted by Duterte.

“Yes, I was consulted by the President before he made the decision. Pardon is an act of grace of the Chief Executive. He may exercise this plenary power of executive clemency at any time and under any circumstance,” Guevarra said.

Presidential spokesman Harry Roque said the pardon meant Pemberton no longer has to serve the remainder of his sentence. He said it does not matter whether he had served time at the national penitentiary or a separate facility or if he had qualified for the GCTA program.

Duterte, during his weekly address, said pardoning Pemberton is the fair thing to do since he had served his sentence. He said that after listening to different reports and debates about Pemberton and his own assessment of the situation he concluded that the US soldier had not been treated fairly.

Duterte said there had been debates about how to compute the time served by Pemberton while in jail. He said there were also questions about his conduct during detention, but the problem is there were no reports that he committed bad behavior or bad conduct while in detention. Duterte added that he is not taking sides nor is he favoring Pemberton or the Laude family.

“The President erased the remaining sentence imposed on Pemberton…what the President did not erase is the conviction of Pemberton. He is still a killer,” said Roque, who served as the private counsel of the family of Laude who was killed by Pemberton in an Olongapo lodge.

In December 2015, Pemberton, then 19, was convicted of homicide for killing Laude in 2014 and was sentenced to a minimum of six years and maximum of 10 years imprisonment. He was detained at the JUSMAG detention facility at Camp Crame under a Visiting Forces Agreement between Manila and Washington. He had been detained for close to six years and had reportedly paid the court-imposed civil damages to the Laude family in the amount of more than P4 million.

Lawyer Virgie Suarez, one of the counsels of the Laude family, was surprised by the development, saying: “Just got the news. Goodness I am shocked. Grabe nakakagalit ito. This is really devastating.”

During the hearing in Olongapo yesterday, the Laude family asked authorities to allow them to see Pemberton in jail. Suarez said the pardon bolstered their doubts that Pemberton is no longer in the country. She said with the absolute pardon, Duterte has “effectively hijacked” the process from the Justice Department, Bu-Cor, and even the motion they have filed before the Olongapo RTC opposing Pemberton’s release.

Suarez said Duterte’s pardon shows the justice system in the country is skewed in favor of those who have influence, in this case the United States. She said with the absolute pardon, their motion, the upcoming motion of the DOJ opposing Pemberton’s release as well as the GCTA recomputation would be rendered useless. Pemberton’s lawyer, Rowena Flores, said they were also surprised by Duterte’s decision, adding she only learned about it through the news and text messages from her colleagues.

“I am very surprised by the news. But I am happy with this development and I thank the President. I think with this development, justice is served and laws have been followed,” Flores said. Flores said the pardon does not mean that Pemberton is free to walk out of his detention cell, adding they still have to secure a certification proving there is no longer a case against him. She said they might be able to complete the requirements before the end of this week.