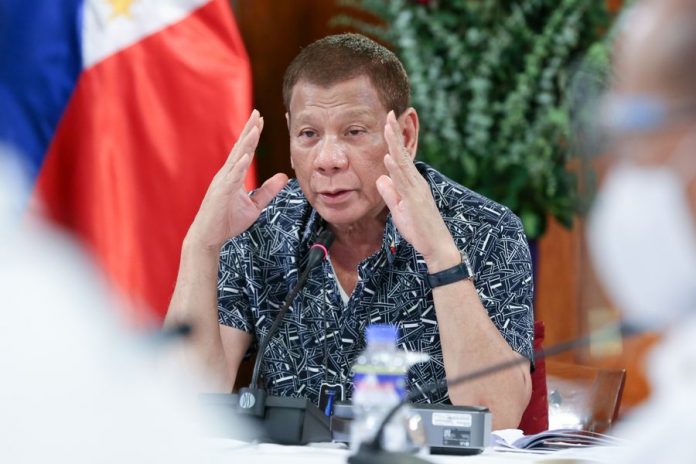 BY JOCELYN MONTEMAYOR and GERARD NAVAL

PRESIDENT Duterte said local government units (LGUs) and private firms are free to choose the company from which to buy COVID-19 vaccines as long as they can ensure the drugs are “safe, sure and secure.”

In an address on Wednesday night, Duterte said a number of LGUs which have money have “opted to go on their own… and they insist that they’d be given the freedom to choose because may pera sila (because they have money).”

Duterte’s statement followed calls from lawmakers that the national government allow the LGUs and the private sector to deal directly with the manufacturers of vaccines for the coronavirus disease.

It also came after several senators asked about the apparent government monopoly in the purchase of vaccines and its seeming preference for a private vaccine manufacturer from China, whose drug is said to be among the most expensive.

Vaccine czar Carlito Galvez Jr., in a briefing yesterday, reiterated that all vaccine purchases at the moment are being done in coordination with the national government because the drug firms are selling only to the government at the moment.

Galvez said only AstraZeneca, the United States’ Moderna, and India’s Novavax-Serum Institute of India have agreed to sell to LGUs and private companies under a tripartite agreement. The LGUs and private firms pay and oversee the administration of the vaccines while the national government provides for “all the consumables” like syringes.

The President said vaccines from China are as safe and effective as those produced in the US and Europe.

Duterte said he will take responsibility for any blunder related to the use of Chinese vaccines from Sinovac or even Sinopharm.

Presidential spokesman Harry Roque said Sinovac is not the most expensive vaccine as government critics claimed, but only the third most expensive. Sinovac is reportedly being sold to the Philippines at a “friendly” price.

Senate majority leader Juan Miguel Zubiri said government officials in charge of securing COVID-19 vaccines must fully disclose how much the vaccines cost because they are using the people’s money.

He said that during the Monday hearing of the Senate Committee of the Whole, the officials invoked non-disclosure agreements they entered into with vaccine the manufacturers.

He said he will raise the issue at today’s second hearing on the government’s vaccine rollout plan today.

The Food and Drug Administration has authorized the emergency use of Pfizer Inc and BioNTech SE’s COVID-19 vaccine which has shown a 95% success rate.

It it the first vaccine the Philippines has approved for emergency use.

“It is reasonable to believe that the Pfizer-BioNTech COVID-19 vaccine may be effective to prevent, diagnose, or treat COVID-19,” said FDA Director General Eric Domingo.

“The interim data from the ongoing phase 3 trial shows that the vaccine has an efficacy of 95 percent in the study population and at least 92 percent among all racial groups,” he added.

In issuing the EUA, Domingo said the FDA also recognized to Emergency Use Listing of the World Health Organization and emergency use authorizations given by established National Regulatory Agencies.

Pfizer has obtained EUAs from the US, UK, European Union, Canada, Switzerland, and Singapore.

With the EUA, Pfizer can provide supply only to emergency response stakeholders, such as the Department of Health or the National Task Force Against COVID-19 or their identified designees, such as hospitals (public and private), health facilities, local government units or members of the private sector.

The FDA is still looking into the EUA application of the UK’s AstraZeneca.
Domingo said Sinovac submitted only the results of phases 1 and 2 of its clinical trials.

“We will have to ask for their Clinical Trial Phase 3 report, which, I believe, they are already collating and consolidating. Until we see them, we cannot assess it fully as the EUA is anchored on the Phase 3 results,” said Domingo.

Asked about Galvez’ projection that Sinovac will have an EUA by February 20, Domingo, “It really depends on how quickly they submit and on how convincing their submitted data is.”

Also yesterday, 320 companies, including small and medium enterprises, and 39 LGUs signed an agreement with the national government and AstraZeneca for some 17 million vaccine doses (around 5.5 million for the private companies and the rest for the LGUs), which are due for delivery by the third quarter of the year.

Galvez and presidential adviser for entrepreneurship Joey Concepcion led the signing.
Concepcion said they are negotiating for a third batch from other firms.

He said the agreement for the first batch, totaling 2.6 million shots, was signed in November 2020 and involved 35 multinational firms. The second included some small and medium enterprises that bought a few thousands shots mostly for their employees, he said.

Galvez, in his report to the President on Wednesday night, said the vaccines would arrive in the country in batches and a mini-rollout can be expected in February through a 50,000-vaccine delivery from Sinovac and possibly from Pfizer under the COVAX facility arrangement.

Signal No. 2 up in 4 provinces in Bicol, E. Visayas