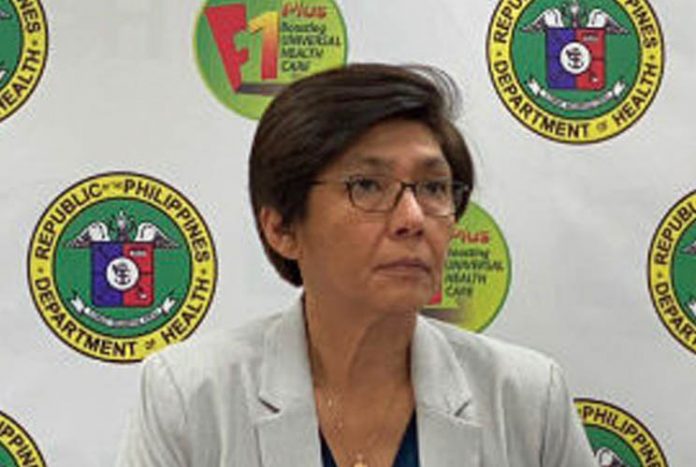 THE Department of Health (DOH) yesterday warned the country might see more “emerging hotspots” for the coronavirus disease (COVID-19) in the coming days after the national government decided to further ease the levels of community quarantines in the country.

In a virtual press briefing, Health undersecretary Maria Rosario Vergeire said it is possible that the current 15 “emerging hotspots” will expand to other parts of the country, majority of which are under general community quarantine (GCQ) or modified GCQ.

“We can really say that there is that possibility. We cannot deny that. The possibility of having more is possible because we have eased our restrictions. Those previously under GCQ are now under MGCQ, while those under ECQ are now under GCQ,” said Vergeire.

Vergeire said having more mobile individuals makes the transmission of the virus easier.

“(One of the) factors why a disease spreads is mobility or the natural movement of persons and the population,” she said.

While the list of provinces and cities considered as hotspots got longer, President Duterte on late Tuesday night ordered the extension of the imposition of the enhanced community quarantine in Cebu City.

The rest of the country has been placed under modified GCQ, where quarantine restrictions are much more relaxed.

“Each person has their own responsibility they need to do. And in so doing, they will be able to protect themselves, their families, and their communities,” added Vergeire.

Presidential spokesman Harry Roque said the declaration of community quarantines would continue as needed but would be eased when applicable.

He said granular or localized lockdowns would be observed similar to what is being implemented in many parts of Metro Manila if there is a need for it.

Roque said apart from monitoring the number of COVID cases, the government gives more weight on the positivity rate and case doubling rate.

He said in Metro Manila, the government hopes to raise the case doubling rate from seven to 10 which means that the doubling of cases takes about 10 days to reach, and lowering of the positivity rate from 6 percent to 3 percent which means three positive cases for every 10 tests, to be able to bring down the current GCQ level to MGCQ.

Even as the DOH sees more hotspots emerging, Interior Secretary Eduardo Año yesterday said he is hopeful that Cebu City can graduate from its current ECQ status to GCQ by July 15 due to the city’s “improved” COVID-19 situation.

Año, a key member of the Inter-Agency Task on the Management of Emerging Infectious Diseases (IATF-EID), met with various stakeholders, including local government and health officials, in the city on Wednesday.

“Sumusunod na rin ‘yung mga kababayan natin dun sa pinag-uutos na ECQ (People are now following the protocols under ECQ),” said Año as he cited the increased presence of soldiers and policemen in the city for the public’s compliance with quarantine protocols.

If this pushes through, Cebu will be placed under GCQ, similar to Metro Manila, where quarantine protocols are more relaxed.

National Task Force on COVID-19 Chief Implementer Carlito Galvez Jr. echoed Año’s assessment of Cebu City as he noted that the situation in the metropolis is now “improving” with the cooperation of local government officials and communities.

He, however, said improvements are still needed, like observing strict 14-day quarantines in isolation facilities and improving the local contact tracing system.

He said the national and city governments need to put up or convert bigger establishments into isolation facilities and increase the current 30 percent contact tracing effort to put a break in the continuing increase in severe and critical cases in the city.

Galvez said many people who might be infected are not being reported, traced and monitored.

While he acknowledged the “psychological stigma” faced by patients and those who came in contact with them, Galvez said such could worsen the condition of sick patients and unwittingly spread the disease.

Aside from these two, Galvez said there are likewise difficulties in the enforcement of physical distancing in some “densely populated” areas in Cebu City.

Galvez said the government is closely monitoring the rising cases of COVID-19 in Eastern Visayas.

Galvez mentioned the region when was asked about the interventions that the government is doing to deter the spread of COVID-19 in the “emerging hotspots” identified by the DOH.

He said that during his visit to different provinces in the country, especially in areas where there had been a reported rise in COVID cases, he saw measures have already been taken by local government units (LGUs) to contain and prevent the spread of the virus.

Galvez said that while the number of cases in Region 8 has been increasing, the provincial governments have prepared isolation and treatment facilities to attend to patients.

He said the provinces and cities in the region are also conducting virus tests that enable them to detect and identify people who have contracted COVID-19, including those who try to slip into the region even without travel authorities and health certificates.

He acknowledged that some local stranded individuals and overseas Filipinos that arrived in the provinces had contributed to the number of COVID-19 cases.

“Iyong pagtaas po ng spike ng mga numbers nila is basically doon po sa locally stranded individuals particularly those iyong mga hindi recorded na kumbaga sa ano po ay sumasakay po sa mga logistics na barko at hindi po natin natitingnan (So the spike in their numbers is basically due to the locally stranded individuals particularly those who are not recorded and just slipped through logistics like the ships who had been overlooked),” he said.

Galvez urged the Philippine Coast Guard to be more vigilant in inspecting their vessels to ensure that all LSIs that they assist and ferry are on their record. – With Victor Reyes and Jocelyn Montemayor