CLOSE to 150 deaths due to the coronavirus disease (COVID-19) were reported by the Department of Health yesterday that raised the number of fatalities past 6,000 while the number of new infections dipped to 2,363 a day after nearly breaching the 3,000 mark anew.

In its latest bulletin, the DOH said 858 new cases came from the National Capital Region while Cavite had 309, Batangas 139, Rizal 112, and Bulacan 97. 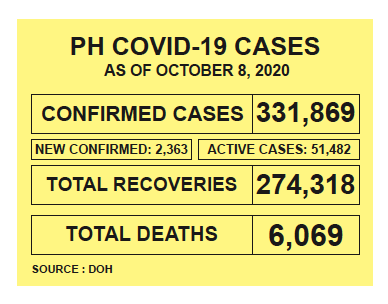 “The number of cases in the Philippines has been decreasing, and currently at less around 2,500 new cases per day,” a UP report dated October 6 said.

This is a stark improvement from the 4,000 daily average recorded in the last week of August.

It also pointed at the improvement in cases in the NCR where the average has decelerated to less than 1,000 new cases per day.

“We are seeing a decreasing trend in Metro Manila. The NCR is on its way to flattening the curve,” said UP Octa member Professor Guido David.

He added, however, that they are not prepared to declare that the curve has been flattened in the Philippines as there are still areas with increasing numbers like Davao del Sur, Iloilo, Misamis Oriental, South Cotabato, Surigao del Sur, Western Samar, Zamboanga del Sur, Benguet, Baguio City, Nueva Ecija, Quezon, and Pangasinan.

“It’s hard for us to say that we have already flattened the curve because the trend is uneven,” said David.

The number of overseas Filipinos infected with the virus increased as 12 more got infected, according to the Department of Foreign Affairs.

The 12 new cases brought the number of Filipinos in 80 countries infected with the virus at 10,861, with 800 deaths. There were also 10 new recoveries, bringing the recoveries to 6,915.

The office of the National Bureau of Investigation-Cybercrime Division has been temporarily closed after one of its staffers tested positive for COVID-19.

Lorenzo said he and his staff underwent tests last Monday and the results were released Wednesday night.

He said contact tracing is ongoing while another round of tests will be done.

Lorenzo said the public can file their cybercrime-related complaints before the NBI Records Division while his office is temporarily closed.

This prompted the Inter-Agency Task Force on Emerging Infectious Diseases to place the city under the modified enhanced community quarantine until October 16, 2020.

“The agency is now conducting an investigation on how the teachers in Region II were infected with the virus,” Briones said.

Earlier reports claimed the teachers acquired the virus while distributing learning materials in the city.

Briones said one of the 10 has been confined at the San Antonio Quarantine Facility while the nine others are staying at a quarantine facility in Alibagu to complete their 14-day isolation. – With Ashzel Hachero and Noel Talacay