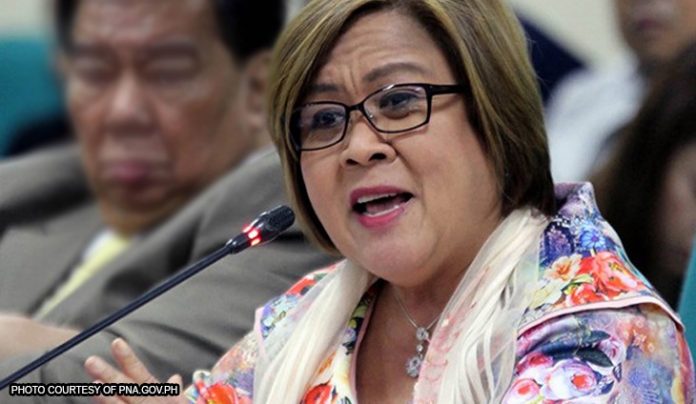 OPPOSITION Sen. Leila de Lima yesterday scored a victory of sorts in her effort to prove her innocence after a Muntinlupa Regional Trial Court (RTC) acquitted her in one of the three conspiracy to commit drug trading cases filed by the Department of Justice (DOJ).

Dayan’s plea for demurrer and bail were also denied.

Dera’s demurrer was also denied, but Aquiatan allowed him to post bail in the amount of P500,000 as the evidence of guilt against him “is not that strong.”

A demurrer is a plea for the dismissal of the case due to weak evidence of the prosecution.
If granted by the court, the case is basically dismissed, while a denial means the defense has to present evidence.

De Lima welcomed her acquittal in one of the three drug charges filed against her, saying that “to be acquitted even in just one case, in the time of Duterte, is a victory.”

In a statement read in a press conference in Quezon City by Boni Tacardon, De Lima’s legal counsel, the detained senator said the evidence presented by the prosecution on Criminal Case No. 17-166 was weak as it failed to establish that she conspired to engage in illegal drug trading.

“It came out during the hearings that the prosecution has no evidence that there was conspiracy. There was not a single witness who proved that I and my co-accused conspired with drug lords to sell illegal drugs inside the New Bilibid Prison. In fact, one of the prosecution witnesses, especially the one which they said was a drug lord, denied that he was a drug lord. They themselves told the court they were not drug lords,” De Lima said in Filipino.

In her 41-page decision on the De Lima-Dera case, Aquiatan granted the senator’s demurrer to evidence and noted that the prosecution failed to support its allegation that Dera was a nephew or a security aide of the former justice secretary, thus subsequently failing to likewise establish any conspiracy between the two accused to commit drug trading inside the national penitentiary.

In this case, the prosecution has claimed that Dera allegedly solicited money from convicted criminals at the New Bilibid Prison to fund De Lima’s senatorial candidacy in 2016.

Dera was arrested at his home in Parañaque in 2019. His lawyer had argued that he was working as a police asset when he was seen frequenting the national penitentiary in 2016.

On the other hand, in the De Lima-Dayan case, Aquiatan’s 35-page decision denied the senator’s plea to dismiss the case after she gave weight to the testimonies of former corrections acting chief Rafael Ragos and agent Jun Ablen that they allegedly personally delivered P10 million to De Lima’ house, where Dayan received it and that they supposedly saw Dayan hand over the money to the senator.

Aquiatan likewise said De Lima needs to explain why high-profile convicts were given special privileges and why drug trading in the NBP continued during her time at the Department of Justice.

De Lima said she will file a motion for reconsideration on the denial of her demurrer to evidence.

The prosecution is still presenting evidence before Buenaventura’s sala to oppose a motion to post bail filed by De Lima.

De Lima has been detained at the PNP Custodial Center in Camp Crame since February 24, 2017.

Sought for comment, Justice Secretary Menardo Guevarra said they have always trusted the impartiality and good judgment of the trial court handling the cases against De Lima.

“We believe that the honorable judge has diligently examined and weighed all the evidence presented by the prosecution before making a determination as to its sufficiency or insufficiency, and for this reason we reiterate our utmost respect,” Guevarra said. – With Raymond Africa

There’s no way but up for Rangel