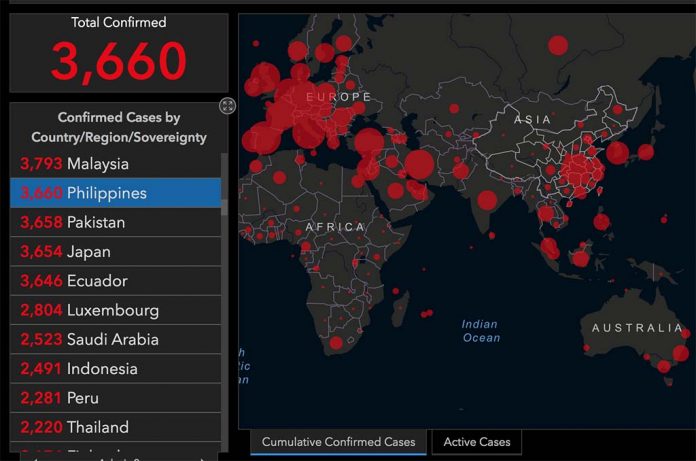 AT least 400 new cases of the coronavirus disease (COVID-19) were reported on Monday by the Department of Health, together with 11 fatalities and nine  recoveries.

The DOH, in its latest COVID-19 bulletin, said there were 414 new cases, while the total number of fatalities is 163 and 73 for those who have recovered.

Globally, the disease that started in China in December last year has spread to at least 200 countries and territories and has infected some 1.13 million persons and killed almost 62,800, according to the World Health Organization.

Among Filipinos living or working abroad, six more have died, bringing the death toll to 55. A total of 535 Filipinos in 34 countries have been infected with the virus. Of the 535,   347 are still undergoing treatment while 133 have recovered and have been discharged from hospitals.

The Department of Foreign Affairs most of the deaths were in the Americas with 27 (up from the 24 on Sunday), Europe at 24 (up from 21 on Sunday), three in the Middle East and African regions, and one in the Asia-Pacific region.

“In term of overall deaths, the Americas recorded a sudden spike with an increasing trend beginning the month of April compared to other regions as reported by the World Health Organization,” the DFA said.

Five more policemen have been infected with the COVID-19, bringing to 19 the number of cops who have contracted the disease as of Monday.

Two of the 19 have died and two have recovered.

In Makati City, there were two new cases on Sunday, bringing the total to 160. It also has nine deaths.

In Taguig City, there were five additional COVID-19 cases, for a total of 100, with six deaths.

Pasay City has five new COVID-19 cases, bring the total number to 50 with three new fatalities or a total of seven.

The toll in Las Piñas City is 39 cases, three deaths, and seven recoveries.

Muntinlupa City has no new COVID case on Monday. The confirmed cases remain at 62, with four deaths.

Sen. Nancy Binay asked the Inter-Agency Task Force for the Management of Emerging Infectious Diseases (IATF-EID)to address what she said was the lack of clear protocol in handling deaths from COVID-19, including cadaver management, storage, cremation, and assistance to families.

Binay said families of those who died from COVID-19 are having a hard time securing death certificates because some local government units and barangay officials do not know the standard procedures in case a patient dies inside his or her home, and how to properly handle bodies which can no longer be accommodated in mortuary freezers and crematoriums.

Binay said she has also received reports that private crematoriums charge P100,000 for the cremation of a COVID-positive person because of the lack of clear guidelines from IATF.

There are only 60 crematoriums operating nationwide, 90 percent of which are privately-owned, and 25 out of 60 are in Metro Manila. Only six are publicly-owned (Manila, Pasay, Mandaluyong, QC, Dasmariñas City and Antipolo City) and are mostly operated by the local government. But of the six, only five are operational and can accommodate only three to five cadavers a day. — With Victor Reyes, Noel Talacay, and Raymond Africa

CBCP: Pontiff chose to be compassionate over righteous