SURPRISED by the recent spike in the number of critical coronavirus disease (COVID) infections, the Department of Health (DOH) is revisiting its data, especially those coming from regional offices, to determine the cause and ensure the country’s health system is capable of dealing with any kind of upsurge.

Health Undersecretary Leopolodo Vega, in a virtual briefing in Malacañang, said critical infections spiked to 3.3 percent over the weekend and remained at the 3 percent level in succeeding days from just 2.5 percent last September 19.

“We are validating the intensive care units data now, the critical units in Metro Manila are still adequate, the ICU beds are sufficient. We have not strained it but we’re also trying to find out the reasons (behind the upsurge),” he said.

He said the agency’s regional directors and surveillance teams are looking at the number of critical patients in public and private hospitals to validate the increase. 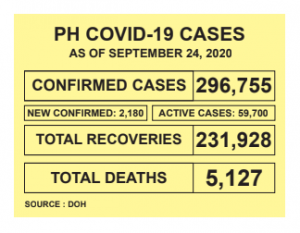 Vega said it is important to determine the cause of the increase that he said came as a big surprise, considering the DOH had expressed confidence the county was finally flattening the curve earlier this month.

“That’s very new. The two percentage points went up and we were surprised but we are not alarmed but because the health system capacity is there,” he said.

Presidential spokesman Harry Roque said the more important thing is to ensure the critical care capacity is not overrun by the high number of infections.

He said present mild cases, which stood at 82.6 percent as of yesterday, still outnumbered the number of asymptomatic (9.2 percent), severe (1.3 percent) and critical (2.9 percent).

“The important thing is, we do not breach the critical care capacity because it is important to care for those who had severe or critical cases,” Roque said.

He reminded all senior citizens, minors and other vulnerable sectors to stay at home amid the increase in the critical cases.

“The critical cases have slightly increased. To the seniors, the young, those with illness, pregnant women, we must stay at home, most especially the seniors. The seniors are vulnerable to COVID-19 and they may become critical,” he said.

Asked how the latest data would affect the community quarantine levels in various parts of the country, including Metro Manila which is under the general community quarantine, Vega said the assessment would be based on the positivity rate, doubling time rate and the critical utilization rate, among others.

He said Metro Manila may need to reduce its positivity rate from five to nine to be able to downgrade the GCQ to the modified general community quarantine (MGCQ) level.

Except for a few areas including Metro Manila, most parts of the country are under MGCQ.

Roque reiterated that observance of minimum health protocols, including the use of face masks which he said is effective in reducing the risk of contracting the COVID-19, is a must.

He said science had already proven the effectiveness of the face mask amid calls to stop its use. Among those reportedly advocating to stop the use of face masks, and instead rely on faith, is Archbishop Ramon Arguelles.

Roque reminded everyone to “stick” to their roles in society like the bishops who are there to promote one’s faith.

“We should use our influence in society to help the country lower the number of COVID cases. Encourage the use face mask instead of discouraging it,” he added.

For the third straight day, there were less than 3,000 new coronavirus disease cases reported by the DOH.

In its latest report, the DOH said there were 2,180 new cases yesterday, lower than the 2,833 reported on Wednesday but higher than the 1,635 reported on Tuesday. For more than two weeks, new cases exceeded 3,000.

Overall, the total number of infections in the country rose to 296,755, with majority of the new cases coming from the National Capital Region (NCR) with 802.

The DOH said there were 36 new deaths, raising the number of fatalities to 5,127.

There were 580 new recoveries, meaning the number of survivors has risen to 231,928.

Five more overseas Filipinos were infected with the deadly virus while another died, the Department of Foreign Affairs said.

The number of overseas Filipinos infected has reached 10 424, 7,069 of them in the Middle East and African regions.

The lone death reported in Africa brought the total fatality count to 786 with 505 of that occurring in the Middle East and African regions.

The DFA said there were 16 new recoveries, bringing the number of recoveries to 6, 645. – With Gerard Naval and Ashzel Hachero