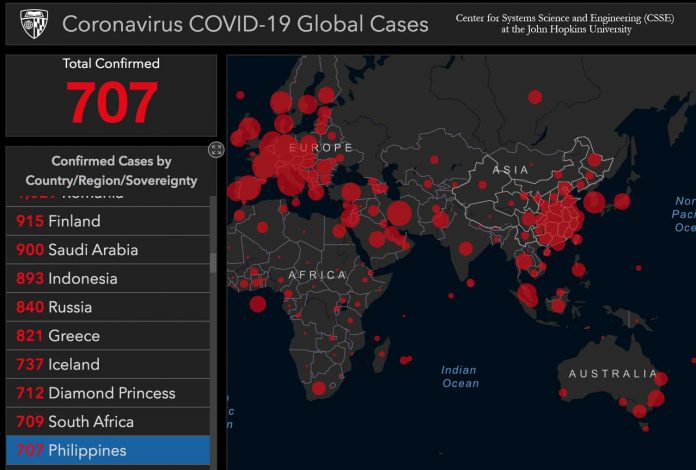 THE Department of Health on Thursday reported 71 new cases of coronavirus disease 2019 (COVID-19), bringing the total to 707, with seven new fatalities and two new recoveries.

Among the fatalities are six physicians, Health Secretary Francisco Duque told a regular news conference. He said case numbers would rise in the coming days as more tests are carried out.

Globally, there are at least over 470,000 cases of COVID-19 in 200 countries and territories, according to Reuters figures. Deaths linked to the virus rose by 2,400 to more than 21,000 worldwide. Italy recorded the most in the latest daily figures, with over 680 deaths.

The first of the two new recoveries is Patient (PH) 112, who is a 41-year-old Filipino male from Makati City with travel history to Japan and exposure to known COVID-19 cases. He was confirmed positive for COVID-19 on March 14, and was discharged on March 21.

Second is PH 28, 69 years, Filipino male from Marikina City with no travel history and exposure to a known COVID-19 case. He was confirmed positive for COVID-19 on March 10, and discharged on March 22.

First of the new deaths is PH 321, 46, Filipino male from Rizal with no travel and exposure history. He was confirmed positive for COVID-19 on March 21, and expired on March 23 due to acute respiratory disease secondary to community-acquired pneumonia, COVID-19 with comorbidity hypertension.

Fourth: PH 636, 56, Filipino male from Pampanga, no travel and exposure history, expired on March 24 due to acute respiratory distress syndrome secondary to COVID-19, pneumonia, acute respiratory failure with comorbidity hypertension. He was confirmed positive for COVID-19 on March 25.

Fifth: PH 600, 87, Filipino male from Sultan Kudarat with no travel history, expired on March 14 due to acute respiratory failure secondary to chronic obstructive pulmonary disease (COPD) on top of community-acquired pneumonia, COVID-19 with comorbidities COPD. He was confirmed positive for COVID-19 on March 24.

Seventh: PH 327, 46, Filipino male from Laguna with no travel history, expired on March 15 due to acute myocardial infarction, coronary artery disease with comorbidity hypertension, renal disease. He was confirmed positive for COVID-19 on March 21.

The Medical City-Clark and the Angeles University Foundation Medical Center confirmed in separate statements they have admitted two and one COVID-19 patients, respectively, with patients currently in stable conditions.

A second policeman has tested positive for COVID-19.

PNP spokesman Brig. Gen. Bernard Banac said the policeman, who is assigned in Calabarzon, is a 52-year-old male assigned in Laguna.

The first policeman to be infected with COVID-19 is a 32-year-old from the Manila Police District.

“Both patients are now under home isolation and are being closely monitored by PNP doctors,” said Banac.

Banac also clarified a police report on Wednesday which said a staff member from the PNP Chaplain tested positive for COVID-19. He said the staff member is merely a person under investigation (PUI).

“Forgive us for the confusion. What the doctor meant was as PUI. There is still no result from the RITM (Research Institute for Tropical Medicine). The Chaplain Service case remains a PUI for now,” he said.

The Quezon City government reported 15 more cases of COVID-19 in the city, bringing to 87 the number of city residents infected with the virus as of 11 p.m Wednesday.

It said the city recorded three new deaths, bringing the number of fatalities from the virus to 13.

The number of Quezon City residents who have recovered from the virus remained at seven.

The San Juan government said its fatalities rose to eight from five, with the total confirmed cases now at 57.

Las Piñas City has one new confirmed case, bringing the total to 12. There were 263 PUMs, 17 PUIs, and two recoveries.

Duque, in a briefing, said his department did not approve the use of the proposed laboratory testing center of the Marikina government “because it failed to meet the standards in space and biosafety,” said Duque in a press briefing.

He said the laboratory is located in the sixth floor of the City Health Office building.

“We will be helping them establish at a different facility, one that will be compliant with our guidelines for biosafety,” he added.

In the meantime, Duque said suggested the temporary use of the laboratory facility of the Amang Rodriguez Memorial Medical Center, also in Marikina City.

Marikina Mayor Marcelino Teodoro said the DOH recommended that the testing facility be in a separate location or facility outside the City Health Office so that cross-infection is minimized and there will be less foot traffic to protect  staff and Marikina residents.

He said the city dedicated the entire sixth floor of the City Health Office building with exclusive elevator for the testing center. — With Victor Reyes, Christian Oineza, Noel Talacay and Reuters