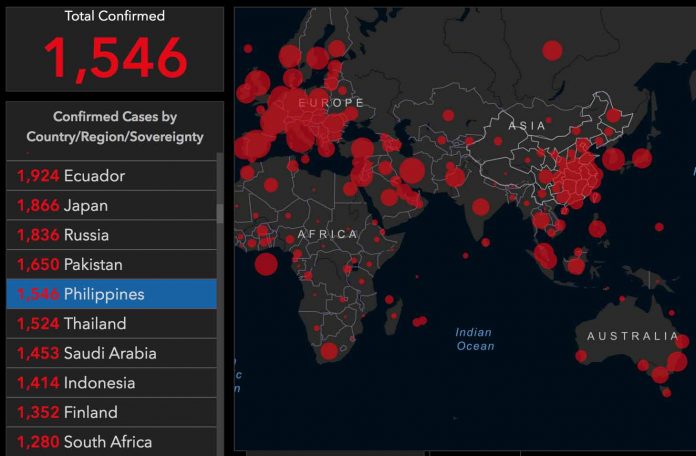 THE Department of Health reported 128 new cases of the new coronavirus disease (COVID-19), bringing the total to 1,546 as of 4 p.m. on Monday.

The DOH also reported seven additional deaths. This brings the total number of fatalities to 78. The number of recoveries remained at 42.

Health Secretary Francisco Duque III said the case fatality rate in the country has gone down to 5 from 8 percent.

“It is only natural as the number of cases increases. It’s the denominator of the number of deaths. So it is already going down,” said Duque in a radio interview.

Globally, the novel coronavirus called SARS-CoV2, which causes COVID-19, has infected at least 720,000 people in 203 countries and territories, and killed almost 34,000 persons, according to a Reuters tally.

Duque said he has directed the Food and Drug Administration to evaluate medication against Japanese flu, called Avigan, in efforts to find treatment for COVID-19.

“We asked our technical advisory group to study this and provide a recommendation,” said Duque.

“This is very early in the development of a drug, but we have seen that it has a positive response to patients. It is very promising,” he said.

The Bureau of Jail Management and Penology said a female paralegal officer at the Quezon City Jail has tested positive for COVID-19, the first case in the bureau.

BJMP spokesman Chief Insp. Xavier Solda said the patient, assigned at the QC Jail’s Mail Dormitory, tested positive on Sunday but has been working from home since March 21. She has asthma, hypertension and diabetes.

The bureau suspended jail visitations as early as March 11, days before President Duterte ordered a Luzon-wide enhanced community quarantine, to prevent the spread of the virus among inmates.

Las Piñas has two new COVID-19 cases, bringing the total to 22, and a third death.

In Pasay City, the COVID-19 cases increased to 18 from 15, with one fatality.

Taguig City had three new cases, for a total of 45, with new a third death.