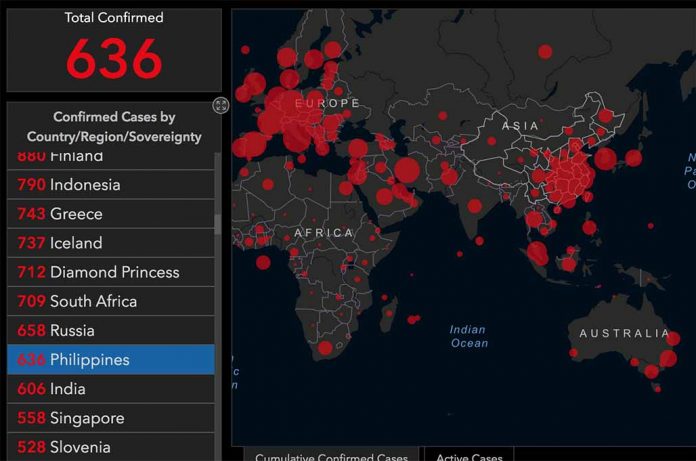 THE Department of Health on Wednesday reported 84 new cases of the coronavirus disease 2019 (COVID-19), bringing the total to 636.

There were also three additional deaths, for a total of 38. Recoveries rose to 26 from 20.

Globally, there are at least 372,700 confirmed COVID-19 cases and 16,231 deaths, according to the World Health Organization (WHO). A total of 197 countries and territories have reported COVID cases.

The DOH said the first of the new fatalities is Patient 319, who is a 56-year-old Filipino male from Quezon City with no travel and exposure history. He was confirmed positive for COVID-19 on March 21, and expired on March 22 from  community-acquired pneumonia secondary to COVID-19 with comorbidities: hypertension and diabetes mellitus.

The second death is Patient 326, a 57-year-old Filipino male from Caloocan City with no travel and exposure history. He expired on March 16 from acute respiratory distress syndrome secondary to community-acquired pneumonia high risk, COVID-19 with comorbidities hypertension, diabetes mellitus, dyslipidemia. He was confirmed positive for COVID-19 on March 21.

The third death is Patient 29, an 82-year-old Filipino female from Marikina City with travel history to the US and exposure to a known COVID-19 case. She was confirmed positive for COVID-19 on March 10, and expired on March 23 from shock multifactorial (septic and cardiogenic), acute respiratory distress syndrome secondary to COVID-19 pneumonia, acute renal failure secondary to sepsis, with comorbidities hypertension, diabetes mellitus, valvular heart disease.

The DOH reported six new recoveries among the COVID-19 patients.

First is Patient 95, 64, Filipino female from Batangas with travel history from Italy. She was confirmed positive for COVID-19 on March 14, and was discharged on March 24.

Second: Patient 10, 57, Filipino male from Quezon City with travel history from Taiwan. He was confirmed positive on March 8 and was discharged on March 23.

Third: PH18, 41, Filipino male from Pasig City with travel history from Taiwan. He was confirmed positive for COVID-19 on March 9, and was discharged on March 24.

Fourth: PH82, 66, Filipino male from Quezon City with no travel and exposure history. He was confirmed positive for COVID-19 on March 14, and was discharged on March 24.

Fifth: PH31, 28, Filipino female from San Juan City with exposure to a known COVID-19 case. She was confirmed positive on March 10 and discharged on March 22.

Sixth: PH23, 30, Filipino female from San Juan City with no travel and exposure history. She was confirmed positive on March 7, and discharged on March 24.

Año also said President Duterte was not present in a meeting held in Malacañang last March 21, which Yap attended.

They discussed the convening of a special session as requested by the President.

Bautista and Avisado, in messages to media, said they would undergo self-quarantine.

Yap said he underwent COVID-19 test last March 10 after he was exposed to some people who had tested positive for the coronavirus.

A staff member of the PNP Chaplain Service was found positive for  COVID-19 while seven others have been classified as persons under monitoring (PUMs).

“His condition is improving. He was (in) critical (condition) a few days ago. Now, he is no longer on life support. He’s really improving,” said Maj. Duds Santos, officer-in-charge of the PNP General Hospital.

Santos said the patient, who tested positive on March 8, is confined at the St. Luke’s Hospital Global in Taguig City. He said the patient is already out of the intensive care unit.

Taguig City Mayor Lino Cayetano said there is a second fatality in the city and three new COVID cases.

Six more Filipinos in Hong Kong tested positive for the coronavirus, bringing the total to 13.

The Philippine Consulate General said it received the information about the additional Filipinos infected with the virus from the Hong Kong Health Department.

“There are now 13 Filipino COVID-19 positive patients undergoing treatment in various hospitals in Hong Kong. The Philippine Consulate General is extending all necessary assistance to them,” the consulate said.

It reiterated its appeal to Filipinos in the city to strictly adhere to health protocols and to stay at home as much as possible.

“If there is a need to go out make sure to avoid crowded places and practice social distancing,” the consulate added.

There are about 238, 000 Filipinos living and working in Hong Kong. — With Jocelyn Montemayor, Victor Reyes and Noel Talacay.

Gabby’s leading ladies are getting younger