CORONAVIRUS disease (COVID-19) cases in 12 regions outside the National Capital Region have taken an alarming turn for the worse but the Department of Health yesterday said the surge “currently remains at manageable levels.” 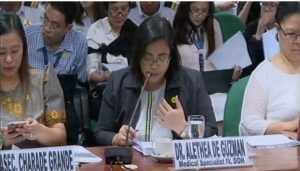 “Our national growth rate has become positive, but metrics must be observed in the next two weeks for (a) definitive trend,” said De Guzman.

“The increase/surge is more prominent outside NCR, but currently remains at manageable levels,” she added.

De Guzman said the positive growth rate in the Ilocos Region is up by 110 percent, Bicol Region by 38%, Soccsksargen 16%, and Bangsamoro Autonomous Region in Muslim Mindanao 45%.

The DOH said cases in NCR (-3%), CALABARZON (0%), MIMAROPA (-13%) and Western Visayas (-11%) have so far plateaued, with indications they are going downward, while the trend in Eastern Visayas has gone from positive to negative (-17%).

In a televised public briefing, Health Undersecretary Maria Rosario Vergeire said the surge in the provinces can be attributed to the mobility of the public during the holiday season.

“One of our major assumptions is that during the holiday season, many went home to the provinces, had their celebrations and gatherings,” said Vergeire.

“All of these things might have contributed to the increase in the number of cases in the other areas,” she added.

Vergeire also said they are not discounting the possibility that many people in the provinces neglected the minimum health protocols.

The DOH reported 1,783 new cases on Thursday, raising the number of infections in the country to 507,717.

A day after the number of casualties breached the 10,000 mark, the deadly virus claimed 74 more victims for a total so far of 10,116 deaths and a case fatality rate of 1.99 percent.

There were 500 more recoveries, meaning the number of survivors has risen to 467,475.

The DOH said this means that 92.1 percent of patients had recovered.

Nine more Filipinos abroad have contracted the deadly virus, bringing the total to 13,633, according to the Department of Foreign Affairs.

The DFA said 8,748 of them have recovered, including three more survivors yesterday.

There was no reported death among overseas Filipinos, with the death toll staying at 944.

Meanwhile, the Justice Department has dismissed the complaint filed by lawyer Rico Quicho against Sen. Aquilino “Koko” Pimentel III for violation of Republic Act 11332 or the Mandatory Reporting of Notifiable Diseases and Health Events of Public Health Concern.

Lawyer Honey Delgado, spokesperson of the Office of the Prosecutor General, said the complaint was dismissed “for lack of probable cause.”

Delgado added that the National Bureau of Investigation, which conducted an investigation on the complaint, recommended the dismissal.

Reacting to the decision, Quicho blasted the DOJ, saying the agency is “bulag, pipi at bingi.”

Pimentel welcomed the dismissal of the complaint, saying the decision of the DOJ is “unassailable and correct.”

“The complaint criminally charged me for violation of non-penal DOH issuances which are not even addressed to me. How can something non-criminal all of a sudden become criminal when you are not even expected to be knowledgeable or an expert about their contents?” Pimentel said. – With Ashzel Hachero and Raymond Africa