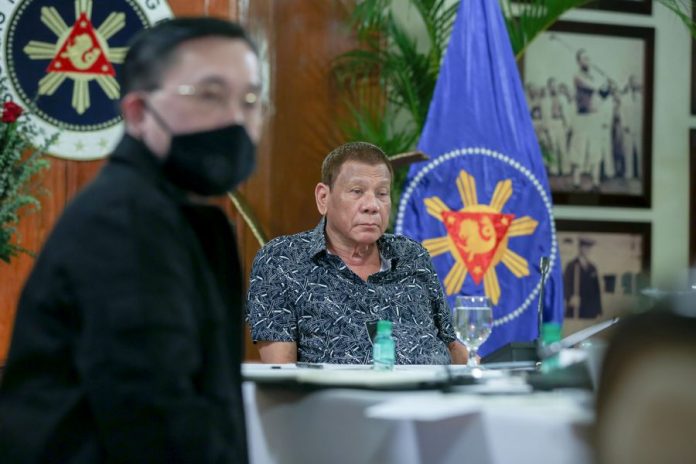 CEBU City is now the country’s “hotspot” for the coronavirus disease (COVID-19), President Duterte said on Tuesday night as he decided to continue to place the Visayan metropolis under strict enhanced community quarantine (ECQ).

Duterte, in a late night public address on Tuesday, said Cebu City will remain under ECQ until July 15 while the national and local governments implement contamination strategies to stop the continued rise of positive COVID-19 cases in the city.

“Cebu is now the hotspot for COVID (coronavirus disease),” he said, noting that Cebu City has the highest number of coronavirus cases in the country. Records from the Department of Health showed that Cebu City has 4,746 cases – of which 3,933 are active cases. It has logged 731 recoveries and 82 deaths.

While saying that he felt sad over the Cebu City situation, the President said Cebuanos have themselves to blame for their current status because of their hard-headedness, complacency and disregard of existing health and quarantine protocols.

He cited the case of Talisay City, which he likened to a market place due to the continued presence of many individuals on the streets. Talisay was under modified enhanced community quarantine (MECQ) from June 15 to 30 before it was downgraded to GCQ on Tuesday night.

Earlier this week, a barangay official was charged administratively for allowing the conduct of a religious procession despite the existing community quarantine.

The President asked Cebuanos not to be angry at him for his pronouncements and the government’s decision.

“Do not be angry at me. Look, I am here to run government. God, you better shape up. I will not… just because we are Visayans, you cannot have a special place in this,” he said.

The President also announced that Metro Manila will remain under general community quarantine (GCQ) up to July 15.

Duterte placed Mandaue City, Lapu-lapu City, Talisay City, Minglanilla and Consolacion – all in Cebu province- under GCQ, while the rest of the towns of Cebu province have been placed under modified general community quarantine (MGCQ).

The provinces of Benguet, Cavite, Rizal, Leyte and Southern Leyte have been placed under GCQ.

Also included in the MGCQ are Lanao del Sur and Maguindanao in the Bangsamoro Administrative Region in Muslim Mindanao.

Duque said the rest of the country is placed under the “low risk” MGCQ where there are more freedom of movement and lesser restrictions.

Those under the “moderate risk” MGCQ shall implement “strict local action” that include localized community quarantine or zoning, strict enforcement of minimum health standards, scaling up of health system capacity, establishment of isolation facility for overseas Filipinos, locally stranded individuals and those with close contact to COVID patients.

Duque said areas under the “low risk” MGCQ, are at the last stage towards the new normal. Minimum health standards or protocols should be observed.

President Duterte said while Metro Manila remained under GCQ, he acknowledged that more people tried to follow the health protocols in the National Capital Region.

Roque said the decision to retain GCQ in Metro Manila was “science and data-driven,” which he said is currently graded at seven. If NCR needs to improve this if it wants to graduate to MGCQ, he added.

Roque said the quarantine levels would again be assessed after two weeks and decided if it there would be changes.

Amid the continued easing of community quarantine levels across the country, the Department of Health (DOH) yesterday reminded the public to continue their adherence to the minimum health standards and other safety protocols.

In a televised press briefing, Health undersecretary Maria Rosario Vergeire said the easing of community restrictions to MGCQ does not give people the license to go back to their old ways.

“Whatever level of community quarantine that is in effect in our areas, there are basic principles and protocols that are in effect,” said Vergeire, adding: “Even if it is MGCQ, it only means we should transition into the new normal.”

This, she said, means that those who have no business outside their homes should stay at home.

“Do not go out because you are still in community quarantine, even if it is the MGCQ,” said the health official.

And for those that really need to leave home, Vergeire said they should maintain the practice of minimum health standards at all times.

“This means we must wear masks when going out, maintain physical distancing, and wash hands frequently,” said Vergeire.

The Archdiocese of Cebu joined calls for Cebuanos to exercise more discipline and obedience to the protocols imposed amid the COVID-19 outbreak.

In a radio interview, Cebu Archdiocese Spokesman Msgr. Joseph Tan said they are hopeful that the people will heed the call of the government to observe minimum health standards if they are to slow down the surge in COVID-19 cases in the city.

“We’re just hoping that, on the part of the public, they would exercise more discipline,” Tan told Church-run Radio Veritas.

In doing so, he said the public will be able to help prevent the further spread of the disease in Cebu City, which is presently considered as a COVID-19 hotspot.

“We should be reminded to do everything to follow the protocol of the IATF-EID (Inter-Agency Task Force on Emerging Infectious Diseases) and the DOH (Department of Health) so we don’t get infected and won’t be able to infect others,” said Tan. – With Gerard Naval