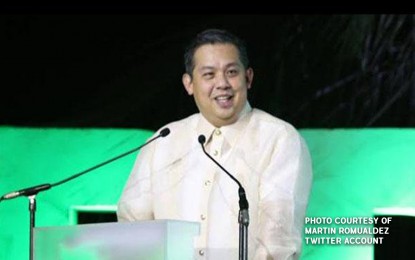 SPEAKER Alan Peter Cayetano will honor his term-sharing agreement with Marinduque Rep. Lord Allan Velasco and ensure a smooth transition of power only after the House of Representatives approves Malacañang’s proposed P4.5-trillion national budget for 2021 in a four-day special session that President Duterte has called for, majority leader Martin Romualdez said yesterday.

“I assure my esteemed colleagues that the gentleman’s agreement will be honored after the approval of the national budget for 2021 on third and final reading on Friday, October 16. Let us set aside politics and focus first on the passage of the national budget as requested by the President,” Romualdez said in a statement, of which an amended version was later released.

The statement was issued after Velasco met over the weekend with presidential daughter Davao City Mayor Sara Duterte, who has reportedly been calling lawmakers to consolidate support for the Marinduque lawmaker, whose camp claims they now have the numbers to unseat Cayetano.

Romualdez said he spoke with Executive Secretary Salvador Medialdea who confirmed to him that President Duterte’s call for a special session under Proclamation No. 1027 was only meant for Congress to resume the congressional deliberations on the proposed national budget and not for a leadership change.

“We will respect the term-sharing agreement and ensure a smooth transition of leadership in the House of Representatives,” said the majority leader, president of Lakas-CMD.

In a separate statement later in the afternoon, Romualdez said the budget should be prioritized before politics and called on his colleagues to tackle the budget starting Tuesday and approve it on third and final reading on Friday.

“Politics such as the Speakership issue will be tackled after the passage of the national budget to assure a smooth transition,” Romualdez said.

Cayetano’s allies called on the Velasco camp not to disrupt the budget deliberations and wait for its passage before they raise the issue of leadership change in the plenary, where the Speaker’s resignation offer was earlier already rejected by 184 congressmen.

Deputy speaker Luis Raymund Villafuerte said the Velasco camp is disregarding the President’s call for an expeditious passage of the budget by rallying supporters to attend the session and support a leadership change when only the budget should be discussed on the floor during the special session.

In a Zoom press conference, Villafuerte showed a screenshot of 1-PACMAN party-list Rep. Michael Romero’s Viber message to the members of the Party-list Coalition, asking them to support Velasco and help him get elected by forcing the leadership to re-open the session today ahead of the October 13 to 16 special session.

“Someone’s texting for them to be there on Monday for a leadership change which is contrary to what the President said (that only the special session is for the budget’s passage). Let’s concentrate on the budget first and discuss politics later,” he told reporters.

In his message, Romero said what is happening now is a “repeat of the 2018 scenario when Mayor Sara called everyone with PRRD’s (President Rodrigo Roa Duterte’s) full support to oust (then speaker Pantaleon) Bebot Alvarez and install GMA (then Pampanga Rep. Gloria Macapagal-Arroyo) as Speaker.”

“It only took one day and everyone shifted allegiance,” said Romero, who was earlier removed as deputy speaker and replaced by Capiz Rep. Fredenil Castro.

Anakalusugan party-list Rep. Michael Defensor urged Velasco’s camp to use their “clout” to help the leadership pass the budget first before engaging in politics “because it would even make his disposition better when you use your influence for the benefit of the country and not yourself.”

Cavite Rep. Elpidio Barzaga Jr., president of the National Unity Party (NUP), said the House must stick to the order of the President to expedite the passage of the national budget for 2021 and “not inject politics and avoid infighting during the special session because it is outside the message of the President under Proclamation No. 1027.”

“It’s inappropriate to discuss politics. We should finish the budget first because if we don’t, we’ll lose track and fail to tackle the most important task at hand,” he said.

Asked to comment on Mayor Duterte’s move to call lawmakers, Surigao del Sur Rep. Prospero Pichay said Velasco will have to be elected on the floor and “show leadership because it can’t be done by proxy.”

“You saw that the Speaker has already offered his resignation. That term-sharing agreement is just between the two of them and the House was not part of it. The resignation was rejected so you see, that would show you that the Speaker is respected,” said Pichay.