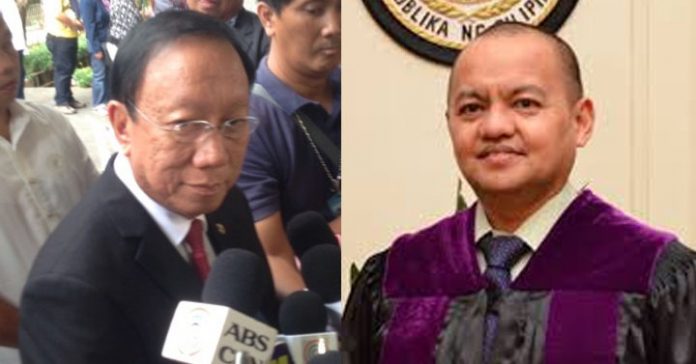 The Supreme Court (SC) has found it “deeply disturbing” that Solicitor General Jose Calida has joined defeated vice presidential candidate Ferdinand “Bongbong” Marcos Jr. in his motion that called for the inhibition of Associate Justice Marvic Leonen from the electoral protest filed by the latter against Vice President Leni Robredo.

The high court likewise cautioned Calida against arbitrarily invoking his position as the People’s Tribune when filing cases with the SC.

These thoughts were contained in the November 2020 resolution of the SC junking Calida’s motion, which echoed the arguments that Marcos used in his own petition that likewise sought the removal of Leonen as the ponente of the electoral protest. A full copy of the resolution was only released yesterday, January 21.

In their separate motions then, both Calida and Marcos cited Leonen’s alleged “bias and hostility” against the Marcos family and their friends” as reason for them to seek his inhibition.

They also pointed to Leonen’s dissent against the burial of the late dictator Ferdinand Marcos at the Libingan ng mga Bayani in Taguig City.

The young Marcos was the first to file his motion. Calida, invoking his role as the People’s Tribune, filed a similar motion several hours later.

“That mistaken view (by Marcos) of this Court is joined by no less than Solicitor General Jose Calida is deeply disturbing,” the SC sitting as the Presidential Electoral Tribunal said in its November resolution.

It likewise said that “the standing asserted by the Solicitor General should be reviewed.

People’s Tribune is not to be hoisted wantonly in big ticket cases involving private cases” as it noted that the national government was not a party litigant in the electoral case.

“Protestant (Marcos) filed this electoral protest in his bid to oust the elected Vice President.

Simply, this involves private individuals only. Yet the Solicitor General comes to this Tribunal without, at the very least, asking for leave of court as a courtesy to this Tribunal,” the SC said.

The SC said if Calida was truly concerned about the protracted resolution of the election protest and its impact on the people as he has argued in his motion, then he should have confined the issue to the supposed delay in the resolution of the case, as “this was the only matter with relevance to the public.”

Instead of doing that, Calida imputed impartiality and incompetence against Leonen, whom the high court said was a member of the collegial body, and thus Calida’s allegations extended to the other justices as well.

The High Court also reminded Calida to be “more circumspect” before he cited unsubstantiated news articles.

“For now, the Tribunal recognizes that forgiveness and toleration may be the most decent response to misguided acts due to counsel’s and the Solicitor General’s misunderstanding.

The parties, their counsels and all others are acting for and on their behalf are all put on notice to be more circumspect in their pleadings and in their public pronouncements,” the SC said.

It also reminded Calida and the counsels in the case to attend to their cases with the objectivity and dignity “demanded by our profession and keep their passions and excitement in check.”

The resolution was not attributed to any justices as the author since it is a per curiam ruling (decision of a judge or of a court in unanimous agreement) but 12 justices signed it.

Associate Justices Amy Lazaro Javier and Rosmari Carandang did not sign as they were on wellness leave at that time.

The 15th position is vacant with the early retirement of Associate Justice Priscilla Baltazar Padilla last November due to health reasons.